The origins of Thiers

Thiers is located in the Bois Noirs, the highest area in the beautiful and untamed Monts du Forez.

The origins of Thiers go back to the Celtic time; its name indeed meant 'the chief's house'.

The Roman town of Thiernum stretches in the valley, on the left bank of the Durolle, near the current St-Symphorien Church, Pré de Foire and vestiges of the Moutier Abbey.

It stood along the antic roadway that connected Lyon to Clermont-Ferrand.

It was therefore an active place of exchange and circulation of goods between the peoples of the Limagne Plain and Monts du Forez.

Sixth century texts referred to Tigernum Castrum, the fortress that stood on the site of the current Pré à la Foire.

A second church dedicated to St-Genès was built on the hillside, near the fortress of the Barons of Thiers.

The Arab invasions of the 8th century forced the inhabitants to take refuge on the rocky spur near the church, within the fortress' ramparts.

This migration of population gave birth to a new settlement.

Both villages expanded through the centuries.

The Quartier du Moutier stretched along the left bank of the river, near the Moutier Abbey and St-Symphorien Church.

The inhabitants were placed under the jurisdiction of the abbey, then of the King of France from the 13th century onward.

The upper town, the historic town with its noble half-timbered houses and narrow streets, unfold on the cliff next to St-Genès Church and the fortress.

It included the Quartier St-Jean, the cutlers’ district, which was under the jurisdiction of the Barons of Thiers.

This dual jurisdiction existed until the French Revolution!

The Barony of Thiers passed from the County of Auvergne to the Duchy of Bourbon during the 14th century. 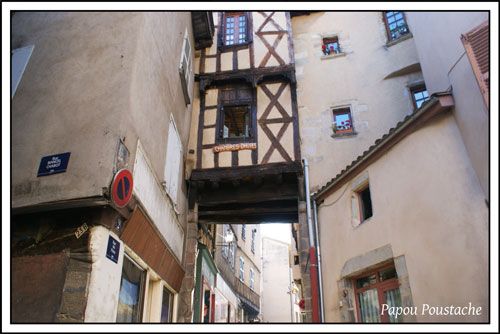 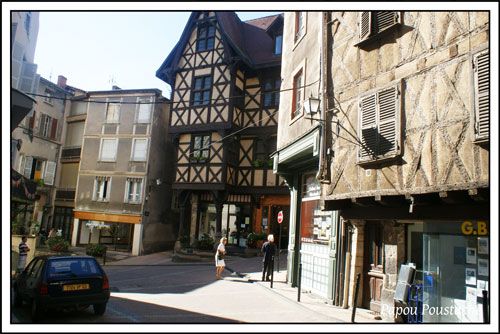 Origin of the Thiers cutlery

Thiers might not be historically important, however, it was and is a prosperous working, industrial and commercial city.

Thiers is, indeed, the undisputed French capital of cutlery!

This tradition appeared in the 14th century, yet no one knows how the cutlers of Thiers discovered the secrets of metallurgy!

All they had was water from the Durolle and plenty charcoal to power their machines, but hardly enough sandstone to make grindstones.

The region, furthermore, was devoid of iron ore!

They amazingly worked around this issue by sourcing iron ore from Dauphiné and sandstone from Haute-Loire.

They tamed the turbulent Durolle and used its energy to power the wheels of the mills and forges they built in the deep canyons.

By then a large part of the production was already exported throughout the Mediterranean Basin, Europe, South Africa and even South America!

As a result, related industries such as tanning and paper making appeared alongside.

Thiers was the most prosperous and important city of Auvergne in 16th and 17th centuries!

Thiers and the river Durolle

It indeed is a 'hanging city' that clings on the steep cliff side that overlooks the Durolle.

The turbulent river dug narrow canyons that once gave rise to evocative place names still in use such as “Bout du Monde - End of the World» or « Creux de l’enfer - Hell's Hole ".

The other side of the city faces the Limagne Plain that stretches to the north of Clermont-Ferrand.

Thiers is an old town, however, it never had any place in the history of France and therefore has a limited architectural heritage.

However, the handful of religious and medieval buildings it boasts are listed Historical Monuments. 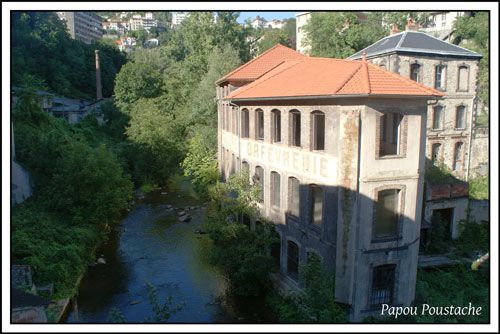 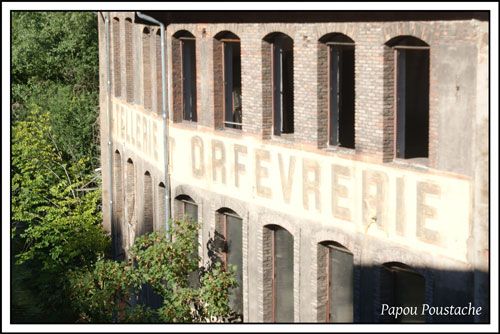 Thiers, the French capital of cutlery

The memory of this thriving industrial past is reflected in the streets names:

Thiers cutlers specialized in the manufacturing of regional folding knives.

The most famous is undoubtedly the Laguiole.

The industry reached its peak during the 19th century when half the knives used by the French peasants came from Thiers.

It was fragmented and each step was entrusted to a workshop to meet the high demand for folding knives.

This resulted in the creation of a multitude of small specialized workshops scattered across the city but also in the surrounding villages.

The mass-produced knives of Thiers were exported worldwide!

Cutlers factories and forges, however, left the banks of the Durolle by the end of the 19th century.

They moved to the plain when electricity allowed them to overcome the driving force of the water.

Thiers cutlery industry is more than ever thriving and highly renowned for it know-how.

The blades have been engraved with Thiers' trademark - the initial T engraved within a square - since 1994 at the initiative of the local Cutlers Brotherhood.

If you like knives, you should attend the annual Art Knife Festival which takes place in May. 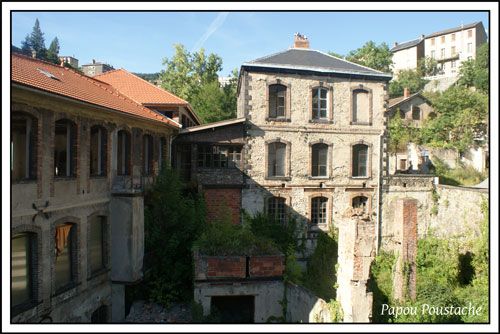 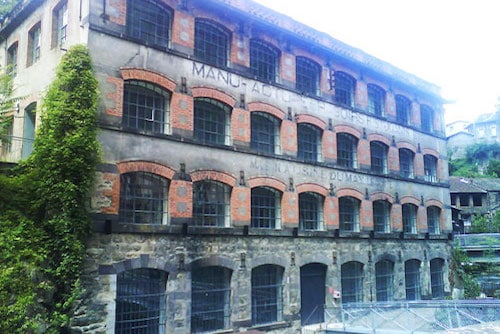 La Vallée des Usines, the industrial heart of Thiers, is located in the Creux de l'Enfer.

Industrial cutlery, paper mills and tanneries appeared along the canyon in the early 19th century.

These impressive buildings, so representative of the industrial architecture, closed in the late 19th century but have since been rehabilitated!

The latter remained in operation until 1980 and were then listed Historical Monument.

L'Usine du Creux de l'Enfer was built on the site of a 14th century forge; it was converted in 1988 in order to accommodate the Centre for Contemporary Art.

L’Usine du May was built in the late 19th century and is a perfect illustration of the industrial architecture of the time.

This cutlery was listed Historical Monument in 2002 and converted in order to accommodate La Maison de l’Aventure Industrielle in May 2009.

The cultural space relates the current and past architectural and industrial history of the Vallée.

The surrounding landscape is astonishing and impressive!

It's easy to imagine the cutlers walking down Chemin des Rochers, a path cut into the cliff to reach their factories. 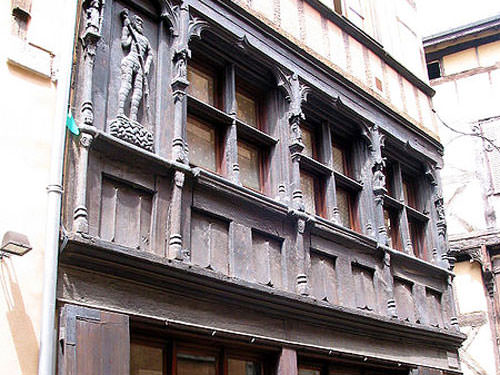 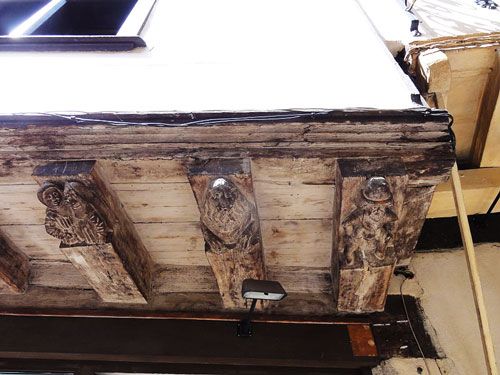 Thiers was burned to the ground during the Hundred Years War and the Wars of Religion, but was rebuilt from scratch in the 15th and 16th centuries.

The historic upper town, which stretches on the hillside around St-Genès Church, is now a"Protected Area".

It is bounded by Rue de la Terrasse du Rempart, a street that boasts spectacular views of the Monts Dore, Clermont Ferrant and the Limagne Plain.

The Rue de la Conchette starts nearby and follows the contour of the 15th century rampart.

It took its name after La Conche, a long gone fountain, and is bordered by 16th century patrician houses.

It follows the contour of the 12th-13th centuries rampart.

it is bordered with several picturesque houses including the richly decorated Gothic Flamboyant house at No10.

The Maison du Pirou was commissioned in the 15th century by the Duke of Bourbon and now hosts the tourist office.

It overlooks the Place du Pirou, the square where justice was once made.

The house at No11 is known as Maison des Sept Péchés Capitaux - House of the Seven Deadly Sins!

It was named after the sculptured heads adorning the beam that support the first floor and represent sloth, wrath, envy, gluttony, lust, greed and pride!

The facade is obviously listed!

This ancient building adorned with carved woodwork spans the lane and connects the two houses located on each side of the street.

It replaces the old Porte Charrier, a old fortress' gate.

The facades of the houses bordering Rue de la Coutellerie are also decorated with unusual sculptures.

The facade at No14 is adorned with wooden lattice in the shape of scallop shells and adorned with statuettes of men and a woman holding awkward positions!

The most enigmatic is the facade of the 15th century Maison de l’Homme des Bois at No21.

It is decorated with scary wooden sculptures, including a man dressed with animal skins and leaning on a stick with a head-shaped knob.

The Musée de la Coutellerie was founded in 1983 at No23 and No58 in a former cutlery workshop which also served as Maison des Echevins (Aldermen’s House).

Rue Anna and Rue des Remparts are farther down and follow the outside of the old fortifications.

They are lined with 19th and 20th centuries cutlery workshops. 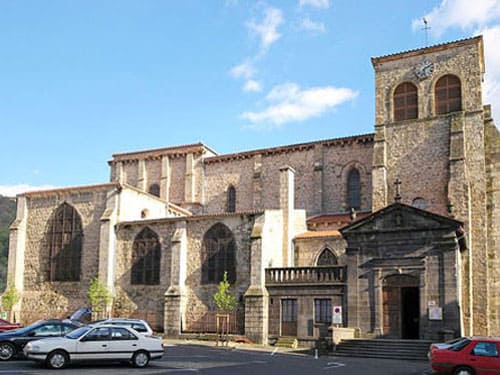 St-Genès Church is dedicated to the Christian martyr Genès of Mycene, who according to legend, was beheaded farther down the slope, on a rock below St-Jean Cemetery.

The rock has since been known as Rocher St-Genès.

The first church dates from the evangelization of the region (6th century), however, it seems that a religious building already existed in the 2nd century.

This important place of pilgrimage was replaced by the current Romanesque church in the 11th-12th centuries.

It underwent many alterations and was enlarged with lateral chapels in the following centuries.

One of these chapels has an altar dedicated to St-Eloi the patron saint of cutlers!

Restoration work conducted over the last two centuries brought to light murals dating back to the early church.

St-Genès boasts the largest Romanesque nave and cupola in Auvergne, and is a listed Historical Monument. 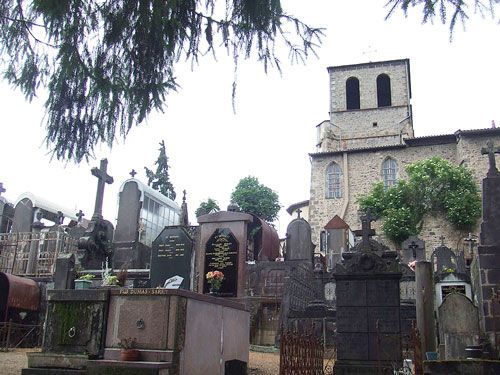 It was erected below St-Genès, on the rocky spur where legend has it that St. Genès was beheaded.

St-Jean Church was entirely rebuilt during the 15th century in order to serve the parishioners of the Quartier St-Jean, the old industrial and working-class district of Thiers.

It was fortified and integrated within the ramparts built during the 16th century Wars of Religion.

All that is left of these fortifications are Le Passet, a steep path sneaking down to the river, the remains of an arched gate and the massive fortified church bell tower.

The church overlooks St-Jean Cemetery which was opened in 1830 on the edge of the rocky spur in order to replace St-Genès Cemetery. 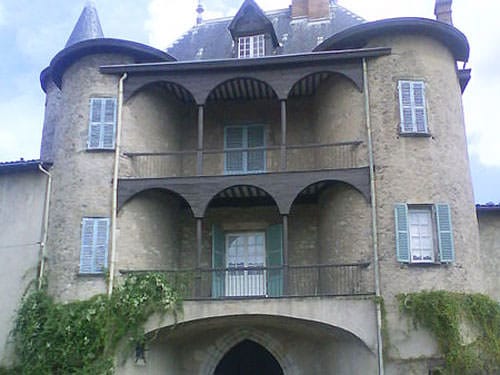 St-Symphorien Church is located on the river bank, by the original settlement.

It was built in the 6th century on the site, where according to legend, a believer placed three stones stained with the blood of the martyr Symphorien.

The Romanesque church was rebuilt in the 11th century and belonged to the Benedictine Abbey of Moutier which was founded in the 8th century.

The abbey was destroyed during a flood of the Durolle in 1707 and was closed at the end of the 18th century.

All that is left are the two towers connected by a wooden gallery that frame the gate of the 15th century abbey mansion.

The building faces the Orangerie du Quartier du Moutier; this building once belonged to a mansion built in 1877 by a wealthy bourgeois. 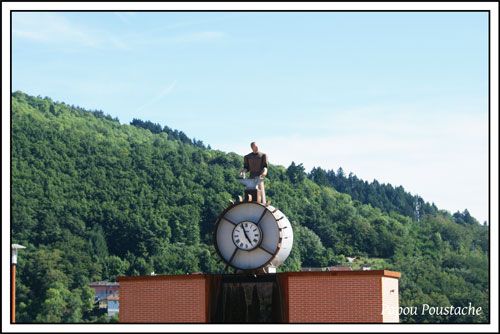 On your way down to the historic district you will walk along the Place Antonin Chastel and Le Jacquemart.

This metal clock represents a 2.10 m high blacksmith hitting an anvil and a paddle wheel symbolizing the water energy necessary for his forge.

Le Jacquemart rings every hour between 9am and 9pm.

This artists Michel and Jean-Pierre Hartmann created this artwork, which was unveiled on 12 April 2008.

Le Jacquemart symbolizes the industrious spirit of the city of Thiers!