The Cotentin Windmill in Fierville-les-Mines

The Cotentin Windmill, the last operating windmill of Cotentin

The Cotentin Windmill is the only public windmill in operation in the Cotentin and one of the few to operate in France.

Perched on a hill at 120m above sea level, it boasts prime views of the Normandy bocage.

Built in 1744, it was then one of the 80 mills in operation in the region; it produced bread flour, but also ground cereals to feed farm animals.

It operated until 1848 as it couldn’t compete with the new technologies that appeared during the industrial revolution and became unprofitable.

It slowly fell into ruins and a century later all that was left was its tower, which the Germans used as an observation post during WWII.

The association of the communes of Portbail bought it in 1993 and restored it over 4 years.

They rebuilt its 7m high stone tower, covered it with a roof that pivots fully and equipped it with wooden slatted wings (the original ones were made of linen). 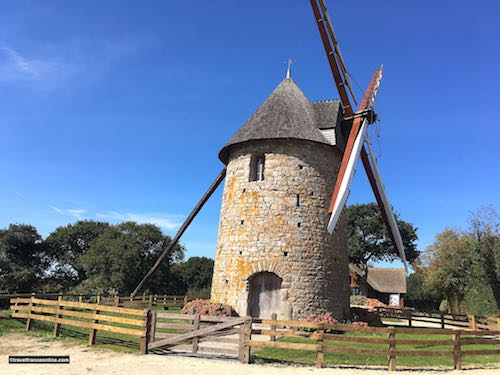 Cotentin Windmill and its barn in the background 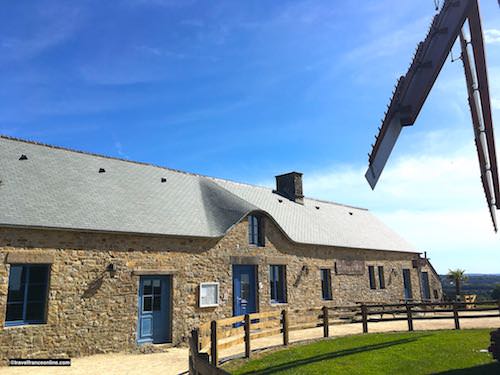 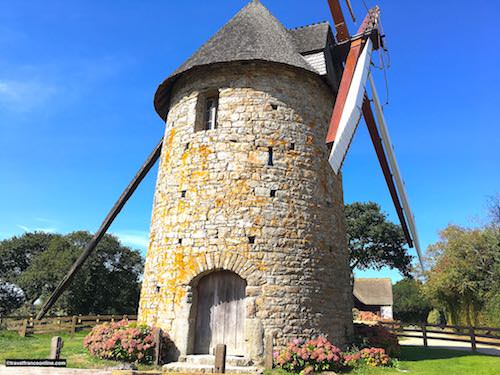 In 1997, the mill produced flour after 149 years of inactivity and oblivion!

Since then, it has been supplying some 15 tons per year of wheat, buckwheat and spelled flour for local bakers.

However, the flour produced at the mill can only be sold on the production site.

The miller’s barn was therefore restored to accommodate a shop selling local products (and flour!), but also an exhibition room-museum and educational workshops.

The miller's house and its bread oven, also restored, was converted into a restaurant.

Spelled was widely grown from the antiquity to the Middle Ages and is known as “wheat of the Gauls’.

This rustic cereal was improved over the centuries to become today’s common wheat, which is rich in gluten that gives the dough its elasticity.

Spelled on the other hand contains very little gluten and is becoming more popular by the day for its dietetic properties.

A miller will take you to the discovery of the beautiful Cotentin Windmill during a guided tour*. The entrance fee contributes to keep it in operation.

Another site well worth the detour when in the region!