However, some French regions have a different name for him.


In Savoie, people indeed call him Chalande, in Burgundy Père Janvier, in the Pays Basque Olentzaro and in Normandy Barbassionné.

We all know that Père Noël has a round belly, a long white beard and a red coat with white fur trim.

However, everyone agrees that he lives at the North Pole and arrives on a flying sleigh pulled by eight reindeer.

St Nicholas tradition indeed originated in Scandinavia, then later spread throughout Europe and the continents.

The Dutch, who landed in New-York in the 17th century, indeed brought with them the legend of Sinter Klaas, the American Santa Claus.

He indeed adopted his trademark image from Julenisse, the Nordic elf who was represented with a white beard, a hat and fur clothes.

Julenisse brought gifts to the children for the mid winter celebrations or Midtvinterblot.

Père Noël is also a reminiscence of the Celtic god Gargan and the Viking Odin; both visited earth on the Winter solstice in order to distribute gifts to the children. 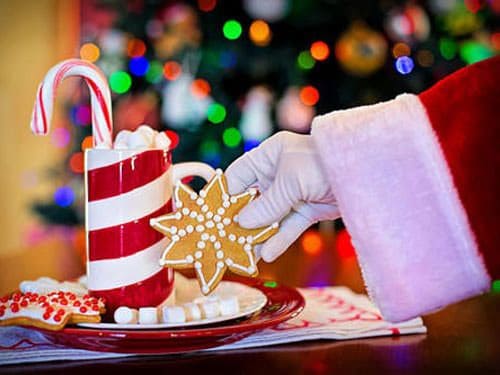 A plate with food and milk for Santa

The reindeer, however, appeared in 1823 after the popularity of A Visit from St. Nicholas, a poem attributed either to Clement Clarke Moore or Henry Livingston Jr.

Rudolph (and his red nose) appeared with the song Rudolph the Red-Nosed Reindeer, a song written in 1939 by Johnny Marks.

We all wrote a letter to Santa - Père Noël, telling him how good we were during the year!

We knew that he would come down our chimney on the night of December 24 and put presents in the socks we (children and parents) placed on the mantelpiece.

In the French tradition, Père Noël initially had a companion known as Père Fouettard.

However, this scary character whipped children who had misbehaved during the year!

That was not really good, so Père Fouettard was made to disappear a long time ago. 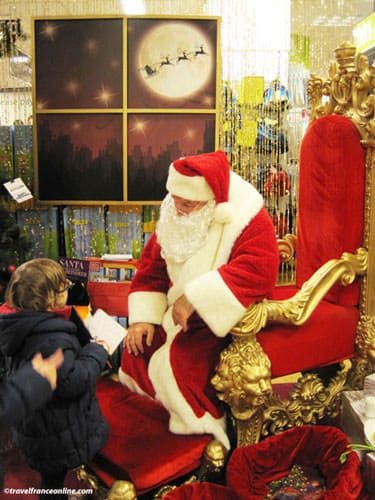 Delivering a letter to Santa! 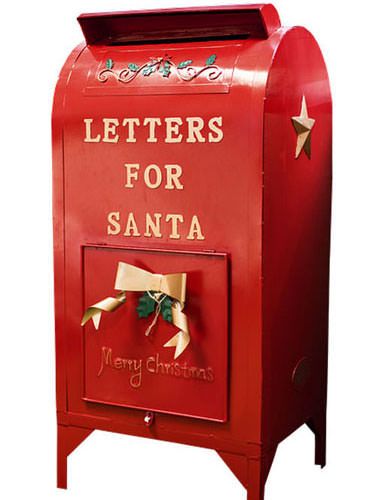 This is where you post your letter to Santa

St Nicholas of Myra and Bari

Is Santa - Père Noël real or a product of our imagination?

The Church of Rome, once more, hijacked the pagan myth and intermingled it with the story St Nicolas of Myra (4th century).

St Nicolas was born in an affluent Christian family and lived in the Roman city of Patara, north of Bethlehem.

He was also the bishop of Smyrna (the present city of Izmir in Turkey), which was then part of the vast Roman Eastern Empire.

His relics were kept in Smyrna until the 6th century and were regarded as miraculous because of the “sacred oil” they produced.

However, Italian sailors from Bari stole them on May 9, 1087.

They brought them back home, where a basilica was especially built in order to house the precious relics.

St Nicolas has since also been known as St-Nicholas of Bari.

The Cathedral of Bari sold some fragments of relics to St Nicholas de Port Basilica in Lorraine in 1087.

St Nicholas has therefore become the patron saint of the Lorraine region (Eastern France), where he is still widely celebrated on December 6.

The Church of Rome attributes many miracles to St Nicholas, who was known for his faith and charity.

According to a first legend, Bishop Nicolas was a very wealthy and generous man.

He indeed spent his entire fortune buying presents for the poor children of his diocese.

He then distributed them... by throwing them through their windows.

The second legend is quite gruesome.

It tells how the holy man resurrected three children who stopped at a butcher’s shop and were killed, cut into pieces and salted!

The butcher fled and the holy man brought the children back to life!

As a result, St Nicholas is the patron saint of children ... and butchers!

In the early 20th century, the symbolism of the butcher was transferred to the Père Fouettard.


This frightening character was indeed forced to accompany the Père Noël in his rounds as penance for his misdeeds!

Finally, a third and much nicer legend relates how St Nicholas gave money to a poor young woman who couldn't afford a dowry.

He indeed threw a first bag of gold in her house while she slept, then a second bag the following night.

The girl’s father, intrigued by such generosity, mounted guard and caught Nicholas, as he was throwing a third bag through the chimney.

Does this ring a bell?!

Nicholas begged him to keep the secret, however, the word got out of course!

They anonymously gave presents to the paupers, who soon believed that the spirit of the generous St. Nicholas had come back.

Bishop Nicholas traveled by donkey, the Père Noël on a sleigh pulled by reindeer.

St Nicholas had a long white beard and wore a miter and a bishop’s amaranth red coat.

The Père Noël has the same long white beard and wears a large red coat with a hood with a fur trim.

In some parts of France, children place a glass of wine for St Nicholas and a carrot for his donkey under the Christmas tree.

In other regions they place a glass of milk for the Père Noël and a carrot for the reindeer!

The Roman Catholic Church associated St Nicholas with the celebration of Christmas - Nativity of Jesus.

Père Noël, the round-bellied old man with a white beard has become the iconic symbol of Christmas.

However, St Nicolas is still celebrated on December 6 in Northern and Eastern France, but not in the rest of the country (to my knowledge).