Dol is one of the 7 bishoprics of Brittany, founded by the Celts from Cornwall in the 5th century AD.

They indeed left their country during the Angle and Saxon invasions and landed on the Breton shores.

They also changed the name Armor (the country by the sea) into Lesser Britain (as opposed to Greater Britain).

The name later evolved into Britannia, Britain and Brittany.

The Celts of Cornwall had already converted to Christianity.

Their preachers, officially recognized by the Church of Rome, were adopted as Breton patron saints when they evangelized the country.

However, they brought with them their old Celtic traditions which became anchored in the core of the Christian beliefs.

This gave rise to a unique culture that is still deeply embedded in the Breton identity.

However, they knew that they wouldn't be able to dethrone overnight the many pagan deities the local folks worshiped.

Instead, they transformed them into local saints who protected, healed and watched over people' in their everyday life.

Saint-Samson Cathedral is dedicated to its first bishop as it was the seat of the bishopric he founded in Dol de Bretagne.

Samson was a Welsh monk who traveled to Ireland to learn the doctrine of St-Patrick.

He then embarked for Brittany around 555AD in order to evangelize the local  populations.

He founded the monastery of Dol de Bretagne on a hill, next to a well.

The well, located outside the cathedral, fed the community that developed around the monastery until the 19th century.

Made redundant, it was filled in and fell into oblivion.

In 1996, a series of excavations uncovered not only this ancient well, but also a well preserved underground gallery.

This corridor linked it to a second well located underneath the Chapelle du Crucifix, formerly know as Chapelle du Puits (well).

The common belief is that this second well is Samson's well.

The monks kept enlarging and improving their monastery until the 12th-13th centuries, when they started building the cathedral.

However, three centuries later Saint-Samson Cathedral was not yet completed!

The western facade is therefore a good illustration of the evolution of religious architecture.

The work on the south facade, the cathedral's superb main facade, even stretched until the 19th century!

As a result, it boasts two stunning features, the 13th century Petit Porche and the 14th century Gothic Grand Porche.

The cathedral's interior also has impressive volumes and architectural features such as the nave's ornate galleries, the glass roof of the apse or the choir's ancient pews.

The building fortunately escaped demolition during the French Revolution as it served as a barn.

Saint-Samson Cathedral is one of the most attractive churches of Brittany and was listed Historical Monument in 1840. 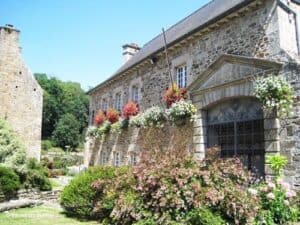 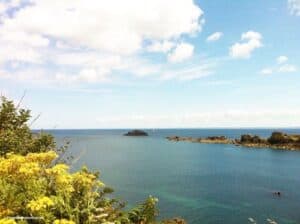