Saint-Merry Church is located in the heart of the historic Marais.

For centuries, the  historical Rive Droite remained a vast swamp, mostly deserted, except for a few religious buildings scattered here and there.

One of them was the small Chapelle St-Pierre-des-Bois.

The tiny chapel was erected in the 6th century along the old Roman road (the current Rue St-Martin) that linked Paris to the north of France.

We only know of the miracles he performed during his lifetime.

It is indeed believed that he died around 700AD, while on a pilgrimage on the Rive Droite of Paris where he was buried.

As miracles kept occurring over his tomb, it seemed logical that the Church of Rome should make him the patron saint of the Rive Droite! 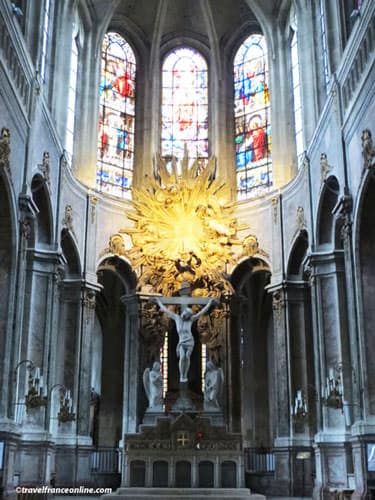 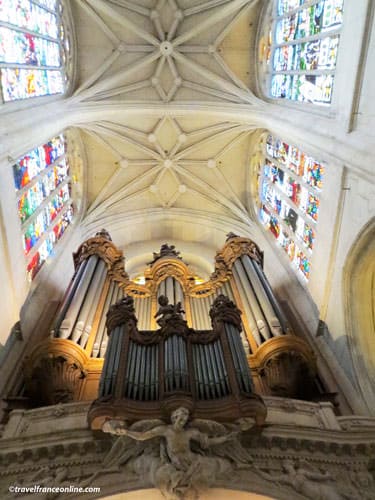 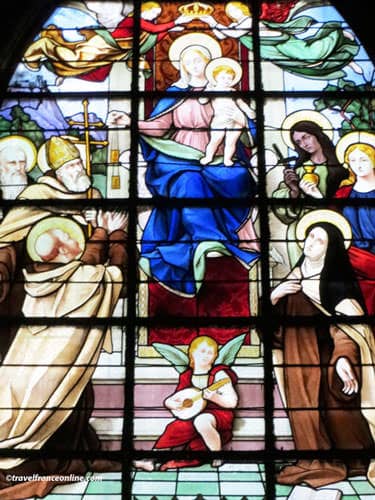 Saint-Merry Church through the centuries

A church was therefore built in the late 9th century to replace the chapel and shelter his precious relics.

This church, rebuilt in the 13th century, was eventually replaced by the current one during the 16th century.

A much larger church was indeed needed then in order to serve the ever-growing population of this popular shopping district!

The Flamboyant Gothic Saint-Merry Church was significantly altered during the 18th century.

All its statues date from the 19th century.

It also contains one of the oldest bells in France, which was cast in 1331 and escaped destruction during the French Revolution.

May be another miracle performed by the holy man!?

Saint-Merry Church contains also one of the oldest fonts in Paris and a superb organ rebuilt in 1781 and played by the composer Camille Saint-Saens!

Saint-Merri’s tomb was in the crypt, however, don’t expect to see it as it has long gone.

Saint-Merry was the parish church of the Italian moneylenders and bankers established in the nearby Rue des Lombards.

It was therefore one of the wealthiest and most lavishly decorated churches in Paris!

Amazingly, it was also the church where Paris prostitutes came to repent during the Middle-Ages, after cashing in on their charms in the surrounding streets!

The church was indeed located right in their 'working area'.

Moneylenders have long gone, so have most street ladies!

Saint-Merry Church is still an active and friendly place of  worship run by the Centre Pastoral Halles Beaubourg.

You can also enjoy the concert given by the Académie Vocale de Paris every Saturday throughout the year.

Or, you can simply walk in and admire its splendid architecture.

It is easy as it is located literally a few steps from the Pompidou Centre and Place Stravinsky and its unusual fountain and the whole area is pedestrian!