Saint-Front Cathedral is located in Périgueux, the capital of the historic Périgord and Préfecture of the Dordogne department.

It stands in Puy-Saint-Front, the district that developed around the primitive St Front Basilica and slowly replaced Vesunna, the antic Cité of Périgueux.

The old city indeed never recovered from the various invasions that ruined it in the 3rd and 4th centuries.

By the late 5th century AD, it even had shrunk to the size of a small fortified village! 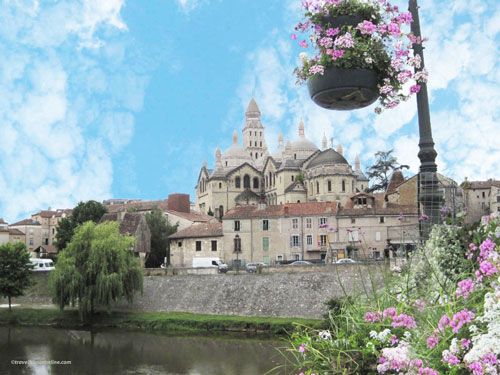 Seen from the south bank 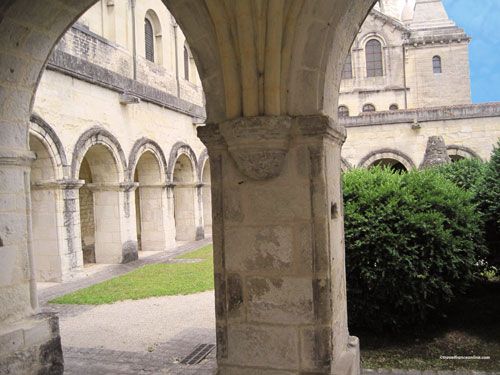 In the early 6th century, monks therefore built a chapel outside the old walled city in order to house St. Front's relics.

The first Bishop of Périgord evangelized Aquitaine in the 3rd century AD.

The chapel became a major centre of pilgrimage and soon a monastery was built.

In the late 10th century, Bishop Frotaire commissioned the construction of a basilica in order to replace the chapel.

Saint Front was consecrated in 1047, but both the basilica and its district burned in 1120.

However, the monks had time to put St. Front's relics in safety, and rebuilt the basilica on the same spot.

The holy man's grave stayed in the vaulted choir until the Protestants salvaged it in 1575! 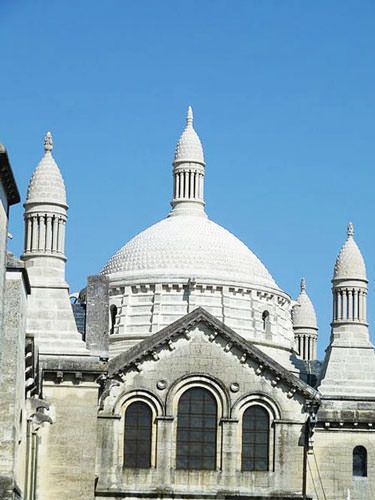 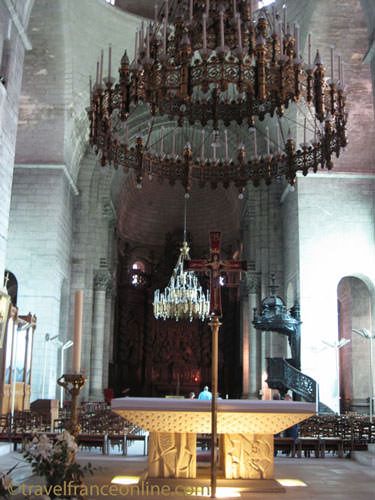 The basilica is laid out on a Greek cross plan and is a perfect blend of Romanesque and Byzantine architectural styles.

The 12th century bell tower connects the two oldest sections of the church.

Paul Abadie (the architect of the Sacré-Coeur Basilica in Montmartre) restored it between 1852 and 1895.

He and his team rebuilt and enlarged the domes, which had partially collapsed; they also added the current pinnacles.

The episcopal seat of the Diocese of Périgueux was transferred from Saint-Etienne de la Cité (Vesunna district) to Saint Front in 1669.

Saint Front Cathedral is also the seat of the diocese of Sarlat and the largest church in Aquitaine.

The keys features of its interior are the splendid Baroque walnut wood altarpiece and the gigantic chandelier above it.

The chandelier is one of three that were in Notre-Dame Cathedral of Paris for the marriage of Napoleon III on January 29, 1853.

The Emperor bequeathed them to Saint Front Cathedral.

The Merklin-Schütze workshop built the impressive organ for the Universal Exhibition of 1867; the Bishop of Périgueux purchased it in 1875.

Jacques-Emile Lafon painted the Chemin de Croix which was restored in the early 2000s.

Finally, the 12th century cloister of Saint Front Cathedral was altered in the 16th century.

UNESCO registered it as World Heritage Site in 1998 under the label Chemins de Saint-Jacques de Compostelle.