The medieval village of Saint Emilion is located 40km north-east of Bordeaux.

UNESCO added the village and its iconic vineyard to the World Heritage Site list on December 2, 1999.

The first reference to Saint Emilion goes back to the 8th century.

Emilian, a Benedictine monk from Brittany, indeed retreated to a grotto located on a hilltop overlooking the Dordogne Valley.

The many miracles he performed soon gained him fame.

People indeed traveled from afar in order to seek advice from the old hermit.

Benedictine monks built their monastery on the site after his death.

They enlarged the grotto out of the rock in order to built a sanctuary to shelter the holy man's ashes (current Eglise Monolithe). 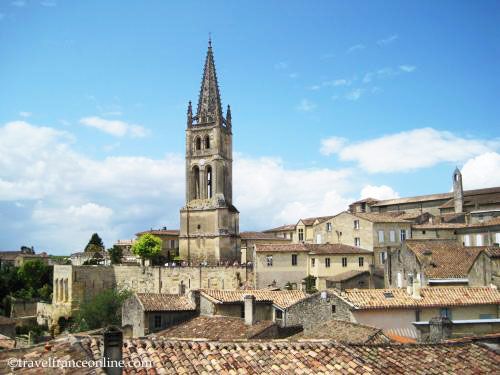 Saint Emilion is without any doubt one of these unique sites that you must visit when in France.

The village stretcehs on the slope of a natural amphitheatre, at the junction of two hills and overlooks its vineyard.

Steep and uneven cobbled lanes, locally known as tertres, crisscross it and take visitors to the discovery of its many architectural and historical features.

Houses were built with the ocher limestone extracted from the kilometers of local underground galleries.

This results in a subtle harmony of warm colours that evolve with the daylight. 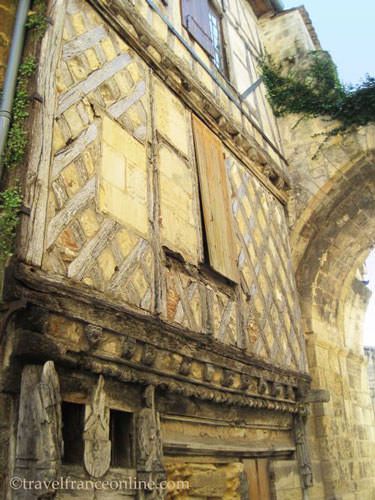 Porte Cadène, a superb Gothic arched gate, spans the picturesque Rue Cadène, one of the lanes that lead to Place de l'Eglise Monolithe.

It was built long after the ramparts and is located within the fortified village.

The name Cadène apparently evolved from the Latin Cadena - chain.

This suggests that the gate was equipped with a chain in order to control the traffic between the upper and lower town.

The Place de l'Eglise Monolithe is the heart of the village.

It is indeed surrounded by shops, restaurants, cafes and the superb covered market.

Amazingly Les Halles were once used for the storage and sale of wheat, and not wine!

It accommodated the village hall from the late 18th century until 1902.

The Eglise Monolithe's impressive belfry peaks 133m above the roofs of Saint Emilion and the village square.

From the 8th to the 12th centuries, the monks patiently carved out of the interior from a single block of limestone in order to enlarge the natural caves and galleries.

As a result, the church is the largest monolithic church in Europe and is almost unique!

The interior strikes by the symmetry of its architecture and the square pillars that support the belfry.

Hundred and ninety eight steps take to the top of the belfry that boasts magnificent views of the village, surrounding vineyards and countryside.

The Benedictine monks enlarged also the adjacent grottoes in order to create the Ermitage.

The troglodyte chapel is the oldest building in Saint Emilion.

Shaped as a Greek Cross, it shelters St-Emilian's Bed.

The hermit's armchair was also carved from the rock by the spring where Saint Emilian lived.

A statue of the holy man stands above the altar.

The monks enlarged additional underground galleries in order to create an ossuary - Catacombes.

The entrance is located in the cliff by the Ermitage.

The samll Chapelle de la Trinité, which they built during the 13th century, is a superb illustration of Gothic architecture.

Tertre de la Tente, a picturesque but steep and uneven cobbled lane, links Place de l'Eglise Monolithe to the Place du Clocher, where you'll find the entrance to the belfry.

The square boasts superb views over the village and is a prime site for lunch and a glass of Saint Emilion.

This is also where you'll find the Tourist Board, in the former Collegiate Church's former Doyenné - Deanery which most likely was the monks' refectory.

You'll find the entrance to the Cloître de la Collégiale to the right of the Doyenné.

The Gothic cloister strikes by its architectural elegance.

It also boasts superb sculptures and murals still, and traces of the Romanesque cloister are still visible in the northern and western galleries.

The impressive Romanesque Collegiate Church is considered one of the most impressive in the department of Gironde.

Both the nave and the main porch (on Place Pierre Meyrat) have retained their original Romanesque features.

Beautifully restored 12th century paintings adorn the nave, and the porch is still topped with the original tower.

The statues of the Apostles that adorned the tympanum were partly destroyed during the Wars of Religion then during the French Revolution.

A superb 14th century porch marks the Collegiate entrance on Place Pioceau, on the northern side of the chancel.

Finally, the church boasts a magnificent listed organ built in 1892 by Gabriel Cavaillé-Colle as well as 15th century carved stalls.

Rue de l'Abbé Bergey and Rue Gadet lead to Porte Bourgeoise on the northern section of the rampart.

The fortified gate stands next to the vestiges of the Palais Cardinal, the 12th century episcopal palace that flanks the ramparts.

The massive square tower was part of the 13th century Château du Roy and is indeed the only intact remaining keep in the Gironde department!

Amazingly, the polemic still goes about its origin.

Some indeed believe it was the French King Louis XIII; others say it was the English Henri II Plantagenêt!

However, we know for sure that the keep was used as village hall until 1720.

It has since found a marvelous use, as it is the place from where the yearly Vintage Banns are proclaimed!

The Tour du Roy stands nearby the Couvent des Ursulines.

Not only did the Ursulines nuns found the convent in the 17th century, but they also invented the recipe of the famous macarons, the specialty of Saint Emilion!

Mansion built against the rampart

The ruined Couvent des Cordeliers stands next to the Porte Brunet, in the eastern part of Saint Emilion.

All that is left of the 14th century monastery is the cloister which was restored and converted into a public garden.

A Flamboyant Gothic arch leads to a series caves hollowed into the rock and used as storage for sparkling white and rosé wines.

It takes at least a half day to visit Saint Emilion, however, a whole day would be perfect to allow for wine tasting!

Tip: There are two large car parks at the bottom of the hill, however, you can still find some parking spaces along Rue Gadet, the lane that leads inside Saint Emilion.