What are the Rotheneuf Carved Rocks?

The Rotheneuf Carved Rocks are located a few kilometers east of the fortress of St-Malo along the Côte d'Emeraude.

The Abbé Fouré, the local priest, patiently carved this cliff during the 19th century.

Local inhabitants nicknamed him the Hermit, as he spent the last 25 years of his life carving the legend of the Rotheneuf.

The Rotheneuf were a local family of fishermen who lived in the 16th/17th centuries.

Turned pirates, they established their monopoly on smuggling over most of the Côte d'Emeraude. 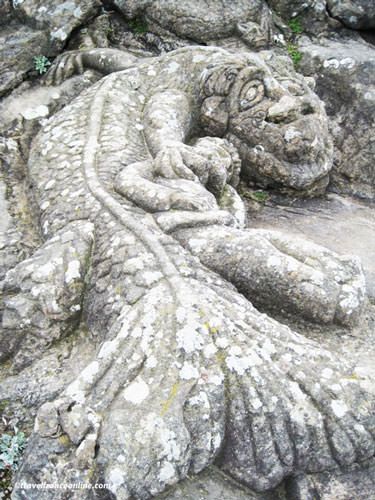 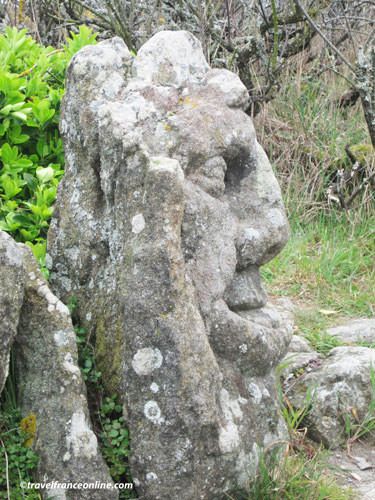 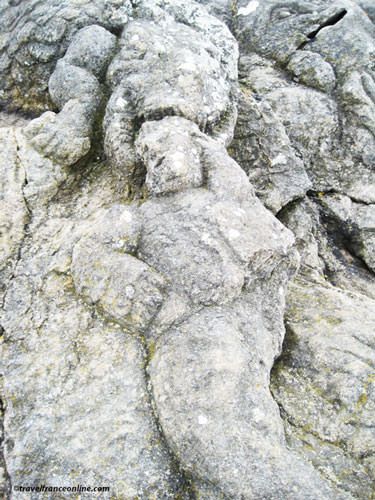 The sea monster devouring the last of the Rotheneuf

Story and Legend of the Rotheneuf

The Rotheneuf indeed imposed their rule to all those who ventured in their territory, including the Lords of Dinan and St-Malo and their descendants!

Therefore, countless outlaws and rogues, attracted by the lure of money, rallied them.

They formed a veritable army and scoured the waters of the English Channel, seizing ships and their booty.

Their rallying points were Paradise Chasm and Death Jump Chasm, the coves located below the village.

The Rotheneuf remained wealthy, almighty and feared until the French Revolution when old grudges, feuds and jealousies, accumulated over the years, began to surface.

However, the others didn't rally any camp as they saw in the revolution an opportunity to make quick and easy money.

They, therefore, turned against Rotheneuf in the hope of seizing his immense fortune and triggered the disintegration of the clan.

Indeed, the men fought against each other, on land and sea, revolutionaries against royalists.

Those who tried to escape were butchered (including women and children!)

The last of Rotheneuf bravely fought until his last breath before Benetin Island and inflicted heavy casualties on the enemy camp.

Legend has it that a huge storm broke out during the fight and that the waves carried the dead on the beach of La Haie, just below the rocks.

It also says that hideous sea monsters with sharp teeth came out of the sea and and devoured the corpses.

Thus disappeared the last of the Rotheneuf along with the coat of arms of his family. 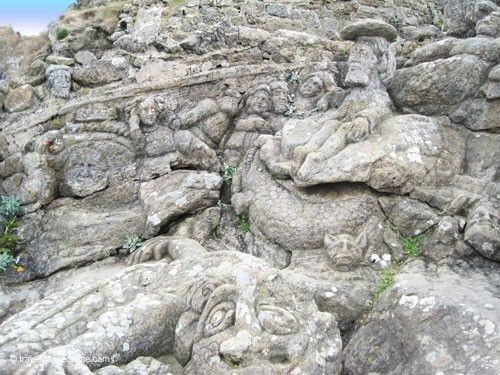 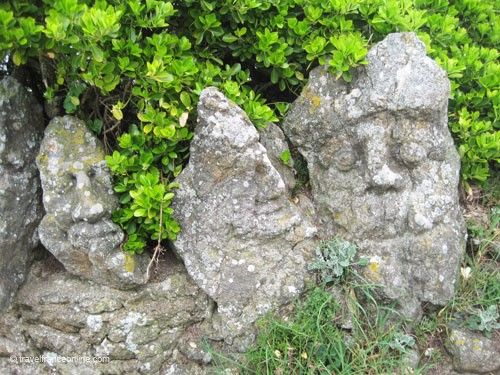 Three of the Five Clowns with their silly expressions 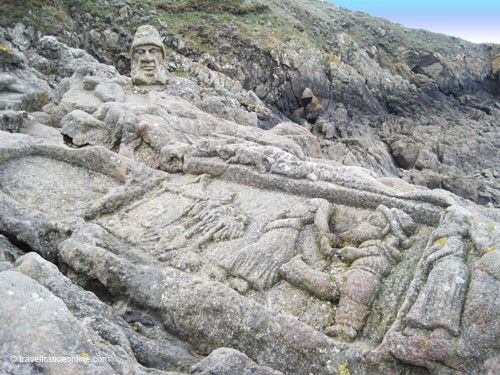 The most famous member of the clan was Durand aka Gargantua, the commander of the fleet of Rotheneuf.

They built and repaired the galleys and handled the caches and warehouses where they hid the loot.

The Abbé Fouré gave their names to some of the carved rocks that are only visible at low tide.

Indeed, no privateer boat in St-Malo could then match the speed and ease of operation of these new galleys.

The Rotheneuf, indeed became 'kings of the sea!'

Another high profile member of the clan was Job aka Vive la Joie, the private adviser to the Rotheneuf.

There were also Arthur, Eugène, Auguste, Bernard and Jean nicknamed the Cinq Clowns (Five Clowns) for their joviality, agility and ability at assaulting ships.

However, they were also renowned for their negotiating skills, which they used on behalf of the Rotheneuf.

Indeed, his heavy build and the helmet he wore, (a trophy he brought back from one of the raids) reminded his mates of a Roman soldier.

Jean de Caulnes aka L'Egyptien (Egyptian) once lived in Alexandria.

Multilingual, but also a fine talker, he had become private adviser to Madame de Rotheneuf.

However, this was not to the linking of her husband! 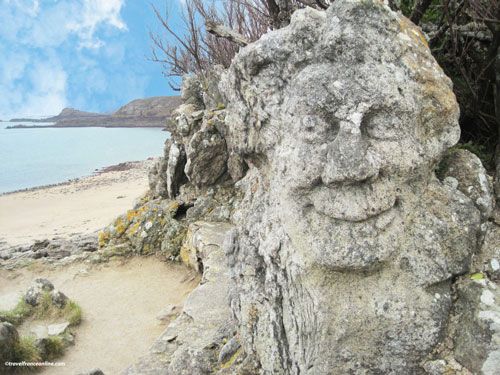 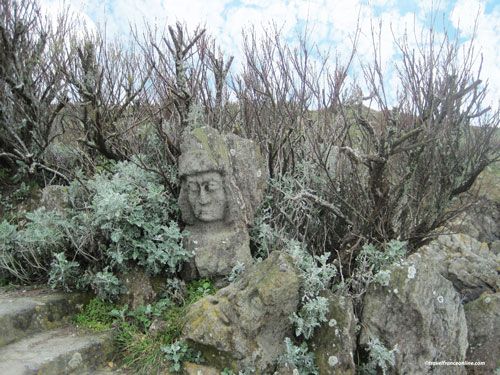 The Egyptian with his man-servant Manille 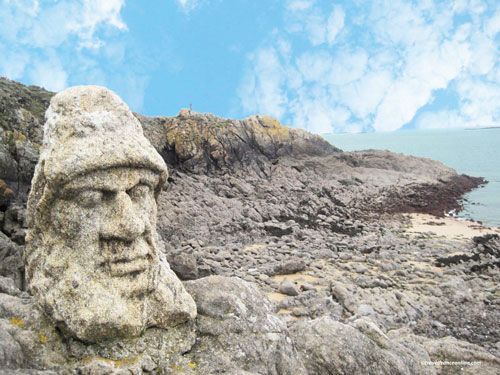 Lucifer was a seasoned and wily smuggler who deserted the King's corsairs of St-Malo and enrolled as a pirate along with the Rotheneuf.

He was in a league of his own for hunting out arms traffickers and seizing their booty on the behalf of the Rotheneuf.

This large tribe of smugglers and outlaws was always on guard and needed watchers.

Le Guémereux was the odd ball of the group whom everyone distrusted.

They called him the Fakir.

Croesus was the treasurer of course!

This old debauched noble had lost his fortune and moved in together with Marie-Jeanne de la Mare, a stocky little woman as wily and debauched as him.

The sordid and twisted merchant kept his distance from the Rotheneuf Clan.

However, he supplied them with various products ranging from kitchen utensils to clothes.

The Abbé Fouré also carved a beautiful chapel on the northern side of the cliff.

It overlooks the Paradise Chasm where the Rotheneuf Clan sought protection from St-Budoc before going to sea!

Amazingly, these crooks who apparently feared neither God nor man were superstitious! 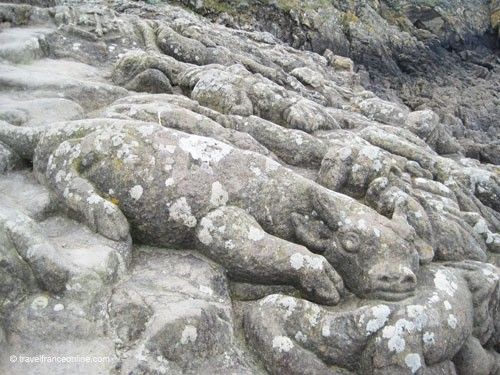 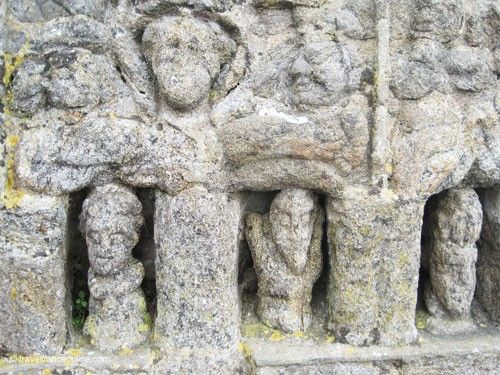 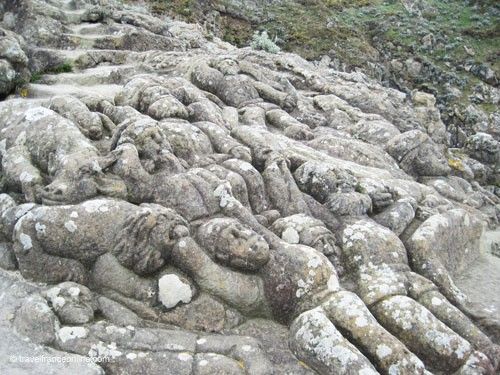 You will find them on the headland located between Le Val and Le Havre beaches, near Le Benetin restaurant.

They are one of the best hidden secrets on the Emerald Coast.

The municipality of Rotheneuf has decided against promoting the Rotheneuf Carved Rocks.

Indeed, excessive flow of tourists could become be highly detrimental to the condition of the sculptures.

Tourists are of course very welcome to visit the site, however, they should be very careful when strolling among the carved rocks as erosion will eventually destroy the sculptures.

Therefore, it will soon be necessary to restrain random access to the Rotheneuf Carved Rocks and delineate paths in order to protect and preserve them.