Passage Verdeau, a perfect illustration of neo-classic style of the mid-19th century

The 75m long and 3.75m wide Passage Verdeau is one of the few remaining covered passages of Paris.

It connects no6 rue de la Grange Batelière to no31 rue du Faubourg-Montmartre.

It is aligned with the Passage des Panoramas and Passage Jouffroy (to the north) as it was part of the same development project.

However, the passage was named after Jean-Baptiste-Ossian Verdeau, the main shareholder of the building society in charge of the development.

The architect Jacques Deschamps designed an imposing glass roof with a fishbowl arch to shelter the terraced houses and their ground floor shops.

Their elegant and understated facades are a perfect illustration of the neo-classic style, the fashionable architectural style of the time.

The Passage Verdeau opened to the public in 1847, but didn’t enjoy the immediate success of the Passage Jouffroy.

It only started to draw the crowds in 1852, when the auction house Hôtel Drouot opened next door.

Many antiques dealers (mostly antic cards and books) indeed opened a shop in the passage.

Amazingly, most of these shops' layout and decoration have changed little since their opening.

The oldest establishment, the photography shop at nos14-16, has occupied the same premises since 1901.

The Passage Verdeau is not as luxurious nor as attractive as the neighbouring passages, but has a lovely old fashioned atmosphere. 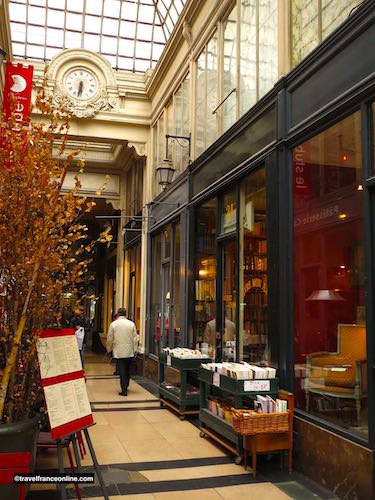 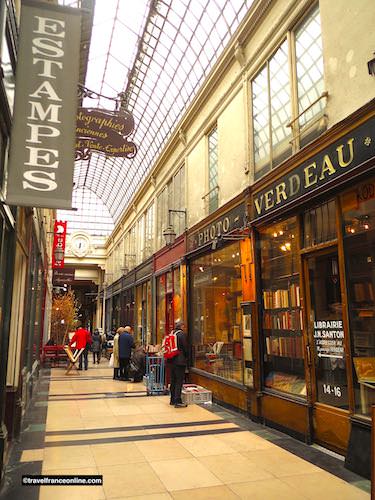 Restaurants and shops near the clock