The Parc de Bercy was landscaped in the 1970's.

The redevelopment work unearthed the vestiges of a Neolithic village (4500BC) and an important quantity of objects of the everyday life.

This included 3 canoes (Pirogues), which are now exposed in the Carnavalet Museum.

Closer to us in time, medieval texts mentioned the manor-house of Insula Bercilliis.

This estate belonged to the Abbey of Montmartre.

Later texts made reference to a second estate, Turrim Berciaco.

The two properties merged during the 17th century in order to form a larger domain.

The architects Le Vau and Mansart were commissioned with the transformation of the old fortified manor into a mansion.

The Château de Bercy was therefore renowned for its lavish decorations, woodwork, paintings and art objects.

The mansion, which miraculously escaped destruction during the French Revolution, was pulled down during the 19th century.

The railway station Gare de Lyon, and a section of Thiers' defense wall, were developed on its site.

Additional outbuildings and train lines, and the wine warehouses, were later built. 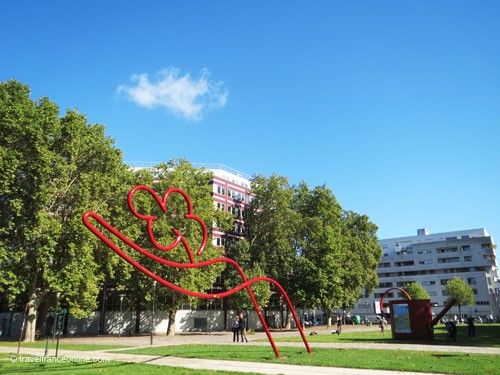 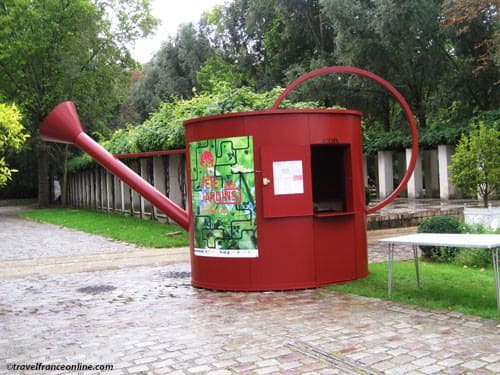 The village of Bercy attracted Parisians as soon as the 16th century because it was located outside the city boundaries.

The wealthiest built a country mansion.

The others flocked in the many guingettes that appeared on the riverbank.

However, the erection of the General Farmers' fiscal wall in the 1770's split Bercy in two.

A section of the village remained outside Paris' boundaries and was therefore exempt of taxes on goods.

At the time, wines and spirits were brought to Paris by barges.

They landed on Quai de la Râpée where the customs pavilion stood.

They were bottled on site then stored in warehouses, as they couldn't be traded outside the city's fiscal boundaries.

A group of investors purchased the warehouses and expanded the trade.

Related industries, such as cooperage and trucking, appeared alongside the warehouses and soon formed a 'village'.

Bercy was then the most affluent wholesale wine market of France and Europe!

However, the territorial reform of 1860 put an end to that era.

However, the powerful federation of the wine merchants obtained a ten-year transition period in order to adapt to the newly imposed tax.

A shoemaker acquired it in order to set up his workshop.

His shop became so successful and renowned that the mansion eventually left its name to the area. 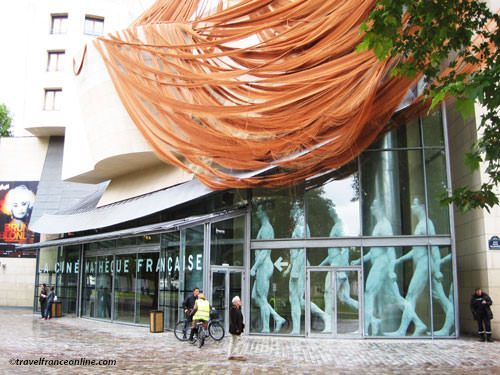 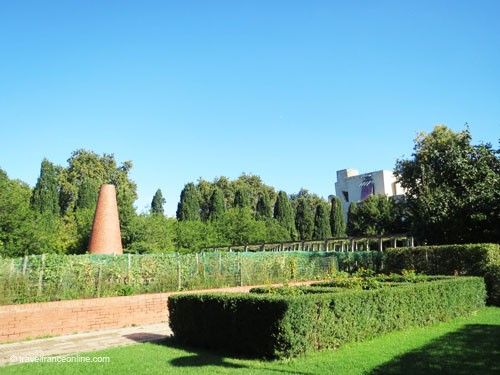 The City of Paris bought the land between 1878 and 1885, and commissioned the architect Viollet-Leduc with the construction of Paris' official wine warehouses.

The Entrepôts de Bercy were a real village.

Warehouses and outbuildings were indeed entirely contained within a perimeter wall.

The Entrepôts were declared of public utility, however, were not open to the public.

Only the vintners and winemakers were indeed authorized inside this 'forbidden city'!

The demolition of Thiers' fortifications after WWI, the success of rail transport and the evolution of storage technology, however, triggered their slow decline.

They were transferred to smaller premises in Jussieu, on the right bank.

By the 1960's Bercy's warehouses were all disused; vintners' and winemakers' houses and shops were closed.

The land started to turn into wasteland and was fully redeveloped in the 1970's. 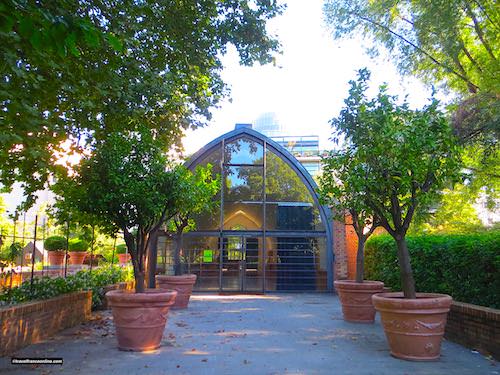 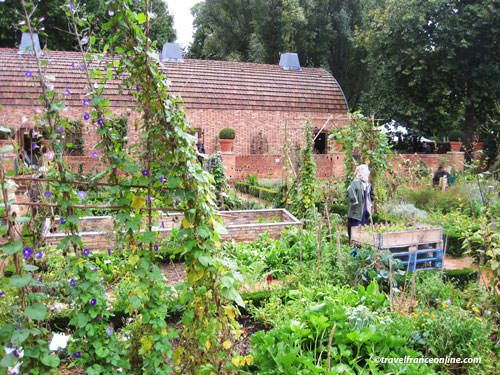 The 14-hectare Parc de Bercy has retained the layout of the Entrepôts' ancient cobbled lanes and the 200 trees that border them.

However, very little is left of the warehouses, except a cellar or Chai de Bercy,  two houses known as Maison du Jardinage and Maison du Lac.

The Parc de Bercy is divided into three gardens.

This vast lawn grows under the shade of century-old trees, and near Bercy Arena - Parc Omnisports.

It includes a sculpted fountain, known as Canyoneaustrate, and an impressive waterfall flowing by the steps leading up to the waterside promenade.

The Cinémathèque Francaise (Film library) is opposite the Jardin Yitzhac Rabin.

This garden was inaugurated on November 5, 2000 in the presence of Shimon Peres.

A section of the warehouses' former perimeter brick wall delineates this section from the Grande Prairie.

Les Parterres are a set of nine smaller gardens:

The Maison du Jardinage and the Chai de Bercy are located in this area.

The former caretaker's lodge and its green house are now dedicated to the art of gardening.

The Chai is an authentic wine cellar that escaped demolition; beautifully restored, it is now dedicated to temporary exhibitions. 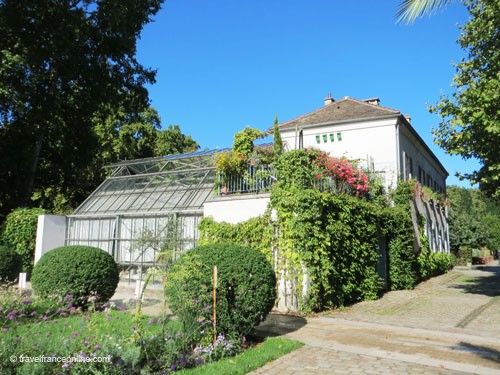 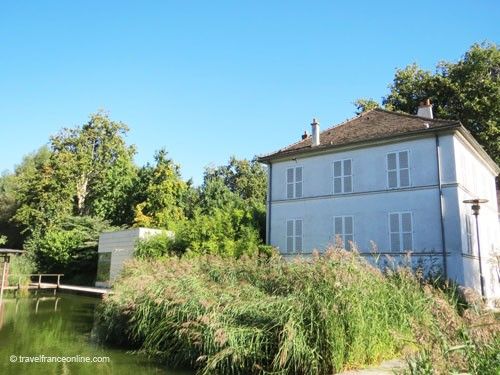 As you progress through the Parc de Bercy, you'll come across two footbridges that lead to the Jardin Romantique.

The Maison du Lac, the second caretaker's lodge, stands on a small island.

Reminiscent of a Mayan head, stands in the centre of a pond carpeted with water lilies.

It is the work of Etienne Martin, who was professor of monumental sculpture at the prestigious Ecole des Beaux-Arts in Paris between 1968 and 1993. 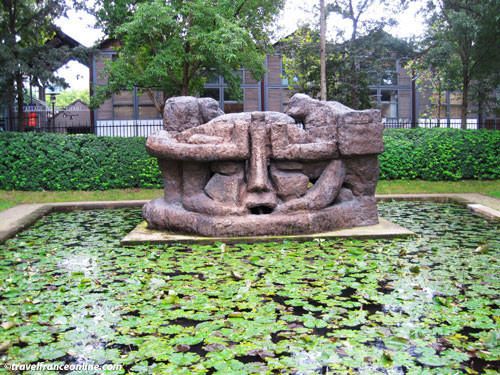 From Bercy Village to Bercy Arena

Bercy Village is round the corner from the Jardin Romantique.

It consists of a central lane, planted with a double lane of trees and bordered with shops and restaurants.

A tall wall protects the Parc de Bercy's riverside from the traffic noise.

The walkway running on its top boasts great views of the park and the Bibliothèque Nationale de France (BNF).

It leads to the Passerelle Simone-de-Beauvoir.

Twenty-one sculptures, Children of the World, frame the footbridge's entrance.

Finally, the Pont de Bercy delineates the park from the Ministry of Economy and Finance.

The Parc de Bercy is a fantastic public park; it's also one of the most successful contemporary urban rehabilitation projects of the late 20th century.

It indeed replaces a district that was falling into oblivion and ruins.

It also preserves the memory of the old Entrepôts, so dear to the Parisians.

Even the contemporary Arena and the Cinémathèque, so controversial at first, have eventually managed to blend into the greenery of the Parc de Bercy.