Nougat, a confectionery invented in Mesopotamia

The nougat de Montelimar is a honey and almond-based confectionery and renowned Provençal specialty.

The recipe soon spread to all Mediterranean countries and appeared in Provence in the late 16th century in pharmacy and dietetics books.

The new confectionery replaced the traditional honey and walnut-based cake introduced by the Greeks when they founded the city of Marseille in 600BC.

The Romans named this cake nux gatum, a name that evolved in nougo (nut) and nogat in Occitan language.

The new confectionery was also known as nogat until the early 19th century when the name evolved into nougat.

Some recipes add broken or ground pistachios and walnuts, dried fruits and vanilla. 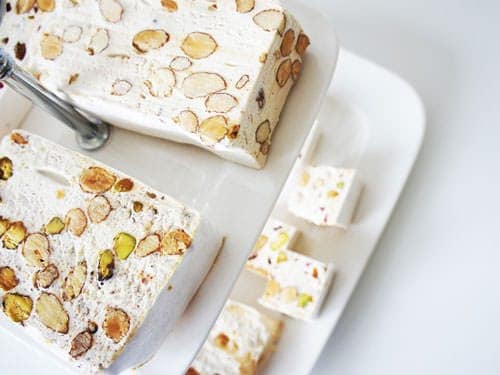 The nougat de Montelimar has been recognized since 1701.

However, a decree of 12/03/1996 establishes that this appellation applies to confectioneries that contain at least 30% of blanched almonds (or 28% of almonds and 2% of pistachios from Sicily), 25% of honey and natural vanilla.

Nougatiers (nougat producers) can import their honey, almonds and eggs from other regions.

In 2003 they founded an association to get an IGP (Protected Geographical Indication) to protect the recipe of the genuine ‘nougat de Montelimar’.

A dozen nougatiers are still active in Montelimar; together they produce about 4500 tons of nougat a year and employ some 300 people.

The nougat de Montelimar is one of 13 traditional desserts or calenos made of honey, sugar, almonds and vanilla that are served in Provence at the end of the Christmas Eve banquet.

Why did Montelimar become the capital of nougat?

Logically Marseille and not Montelimar should have become the French capital of nougat!

Montelimar is far inland, at the boundary of Rhône-Alpes and Provence regions, hence its name of Portes de Provence.

However, it seems that this geographical location played in its favour, as it became one of the stops on the railway line open in 1858 to connect Paris to the Riviera.

Indeed, passengers not only took advantage of the many stops to stretch their legs, but also to discover local specialties.

Fifty years later, the mayor of Montelimar, Emile Loubet, became president of the French Republic and obviously promoted the nougat produced in his home city.

Finally, the construction of the Nationale 7 - the mythical road linking Paris to the Mediterranean - and the advent of paid holidays in the 1930s contributed further to the confectionery's notoriety.

Indeed, the recurrent traffic jams pushed holidaymakers to leave the N7 at Montelimar and thus discover and buy nougat!

The A1 replaced the N7 a long time ago, but the motorway rest area at Montelimar has a boutique that sells nougat.