Najac, the invincible fortress of the Counts of Toulouse

Najac is a beautiful medieval village that spreads under a massive fortress.

Little is known of the village's history before the 12th century.

However, we know that the Romans exploited the mineral mines after they conquered France some 20 centuries ago.

The Counts of Toulouse built the fortress in 1100 in order to defend this wild, sparsely inhabited, but strategic land they owned.

The village stretches along the top of a long promontory, some 150m above the Aveyron River.

Perched high above the valley and encompassed within its massive walls, the fortress of Najac was impregnable in the Middle Ages.

In fact, it never ever came under direct attack! 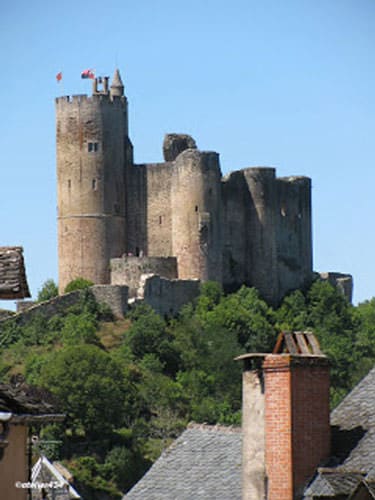 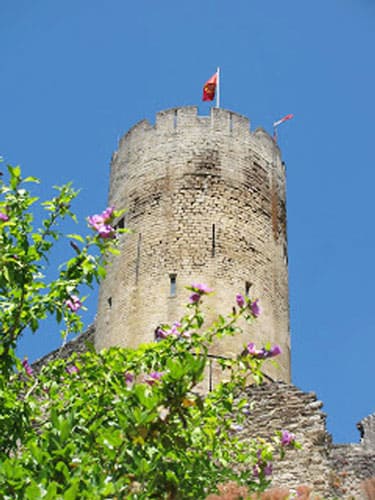 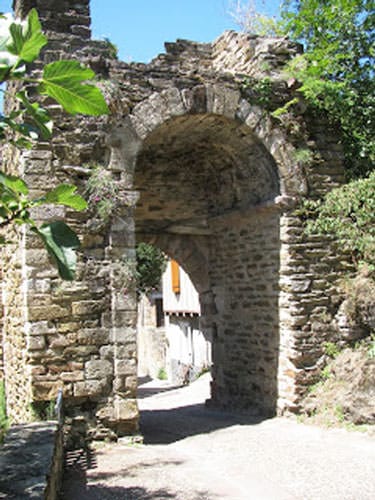 Both the village and the castle had a very sophisticated system of defence.

The village was indeed entirely fortified and divided into several districts separated by fortified gates.

These gates could therefore be closed off to limit fighting to smaller and more easily defended sections.

By the end of the Middle Ages, Najac had 15 gates strategically located throughout its elongated village.

The Porte Pique was built in the 13th century and was the last fortified gate before reaching the castle.

The second major defence feature of the fortress of Najac was the keep.

It was the symbol of power of the Counts of Toulouse, the defence centre of the fortress.

It indeed  peeked some 40m above ground level and a 115-step spiral staircase led to the top.

This spiral turned (still does) tightly clockwise against a central stone pillar.

This ingenious architectural feature made it impossible for invaders holding swords in their right hands to use their weapons as it was just large enough for one person!

There are 4 levels to the keep.

The guards' room was at ground level and the chapel on the 2nd level.

A second guard-room located on the 3rd level had a door that accessed a wall that led to the front of the fortress.

The upper and last level was the Counts of Toulouse's living quarters.

Each level of the keep could be individually sealed off and defended separately.

Archers used the narrow loopholes to shoot the assailants.

These meurtrières were tall and wide enough to allow for 3 or 4 archers to shoot at once.

The bell, installed in 1596 to sound the alarm, is today connected to a clock mechanism and tolls the hour.

The crenelated top of the keep gave the defenders a 360 degree view and therefore allowed them to spot any potential danger.

Finally, the gangway that accessed the keep could be easily removed.

A model of the fortress of Najac has been created in order to show its impressive defence system. 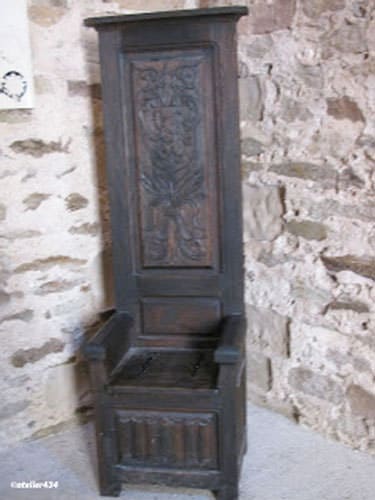 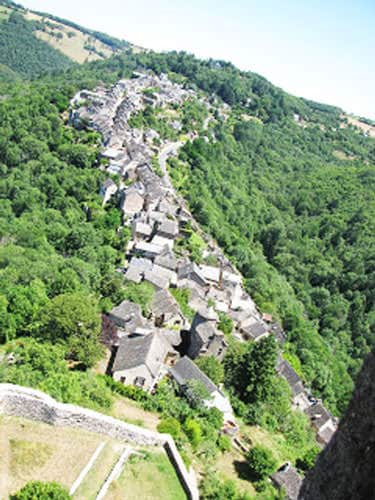 Village seen from the castle

Richard the Lionheart in Najac

In 1185, the fortress of Najac was the theatre of a major treaty.

It was indeed the place where the future King of England, Richard the Lionheart signed a treaty of alliance with Alphonse of Aragon, in order to strengthen his hold over Aquitaine.

Amazingly, Richard spent most all his life here in France and actually couldn't speak English!

He indeed spoke the ancient Langue d'Oc and is reported to have disliked England as it was 'cold and rainy.'

The back of a tall wooden chair, located in the Lords of Toulouse's living quarters, is carved with his coat-of-arms.

Nothing says though that this was his chair.

Najac, saved by the Cibiel family

The Fortress of Najac escaped demolition during the French Revolution.

It was nationalized and sold and has been privately owned since.

However, it initially served as a prison then as a stone quarry.

Fortunately, Alfred Cibiel purchased it in 1906 and put an end to the dismantling.

His descendants still own it and took over the restoration work he initiated.

They eventually opened the fortress to the public in the 1970's.

The fortress of Najac was classified Historical Monument in 1925.