The 223 Morris Columns are an integral part of the Parisian landscape!

You'll find these elegant dark green columns on the pavements,

Morris Columns are not there solely for decoration, though.

They are advertising columns!

However, they are only used for posters that promote concerts, movies, theatre and nightclub shows.

Consider them as the forerunners of our gigantic advertisement boards!

The first advertising columns appeared in Paris in the middle of the 19th century.

The number of entertainment venues such as theaters, music halls and cabarets increased rapidly after the French Revolution.

Space for public display became therefore scarce and was no longer adequate for the ever-increasing amount of advertising.

Posters kept appearing wherever space was available, not only on buildings' walls but also on the walls of public toilets.

These were indeed also located in columns placed on the pavements!

This was not to the taste of all, obviously.

It was therefore time to regulate public display!

The German Ernst Litfass created the first advertising columns in Berlin in 1854.

The French printer Gabriel Morris, a very business minded man, saw there the opportunity of solving the issue and making him a fortune!

In 1868 he therefore bought the exclusive advertising concession from the City of Paris and founded La Société Fermière des Colonnes Morris.

The Morris Columns were born!

Morris would have had a ball selling space for ads if the internet had existed then! 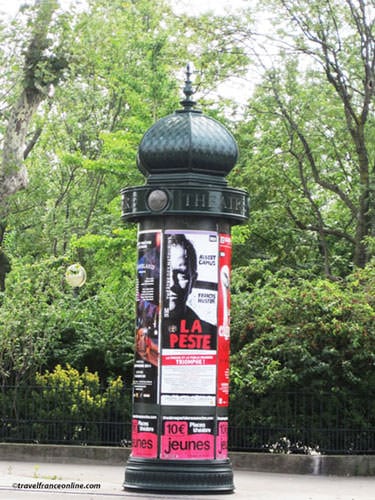 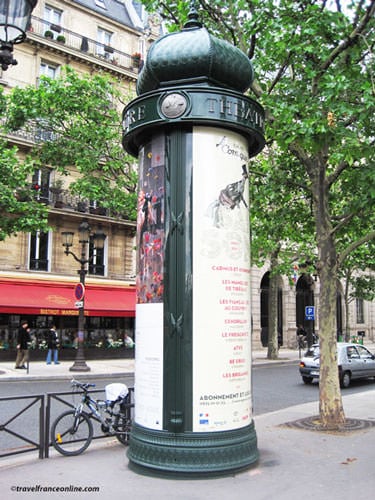 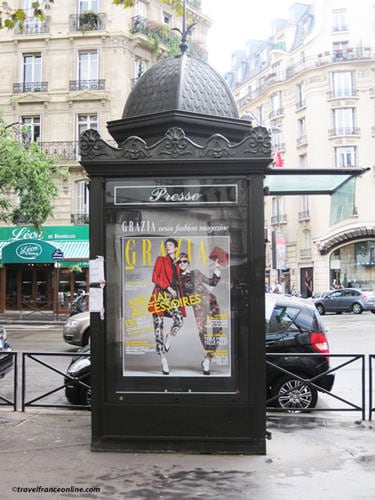 Columns Morris through the years

The first Morris Columns were round and made from cast iron painted in green.

A dome decorated with scales and acanthus leaves topped them.

The base of the dome was sitting on a hexagonal canopy, whose corners were adorned with lion heads.

They were replaced with similar but simplified models through the years.

The new Morris Columns have retained their original style and shape, however, they've been upgraded with modern technology.

Most are now lit at night by an integrated automatic lighting system; most columns are rotating.

They provide about 4m2 of advertising space and posters are now protected from the elements - and vandalism - by perspex glass.

The interior space of some columns can be used for the storage of varied materials and tools used for the maintenance of the streets and pavements.

The Morris Columns have been part of the city landscape for generations.

The decision of the former mayor of Paris to remove them in the years to come obviously caused an outcry from the Parisians!

We just have to hope that the current mayor will have more respect for the city's architectural and artistic heritage!

The issue could definitively be solved when/if the Morris Columns were classified Historical Monuments!

Many Parisians and tourists wonder why they have not yet been listed when so many buildings or monuments that should have been pulled down were!