It is located at No101, right at the corner of Avenue George V and opposite Le Fouquet's restaurant.

This superb Art Deco building, still topped by its original dome, is a listed Historical Monument.

The architects Louis-Hippolyte Boileau and Charles-Henri Besnard designed it before WWI.

The store has an area of 1800m2 spread over five levels interconnected by spiral staircases. 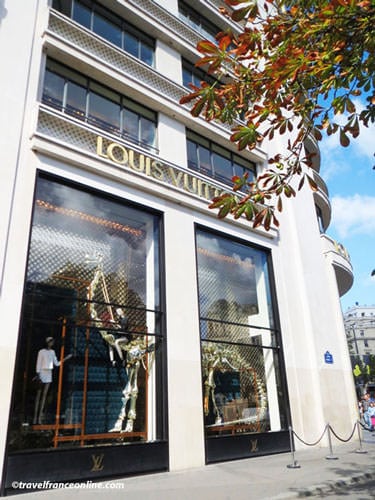 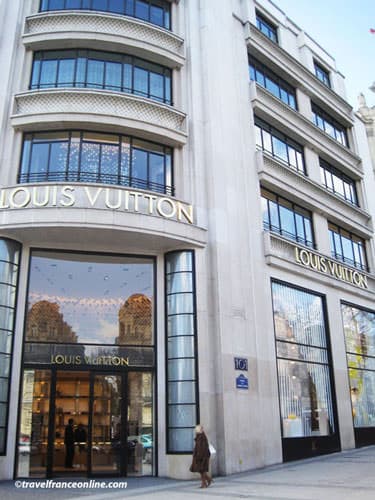 The founding of the prestigious brand goes back to 1854, when the trunk maker Louis Vuitton opened his first store on Rue Neuve des Capucines.

At the time Louis Vuitton was not yet selling his iconic, trendy and very expensive handbags.

However, he had just revolutionized the luggage industry by creating the first lightweight and airtight flat-bottom trunks!

His trunks were an instant hit!

Indeed until then, people traveled with trunks that were not only heavy but had a rounded top in order to allow water to run off.

However, this made them impossible to stack!

Vuitton’s immense success was consecrated when the company participated to the Paris Universal Exhibition of 1855.

So in 1876, the company created a new beige and brown pattern in order to differentiate its trunks from the many imitations.

In 1885, Vuitton opened a store on Oxford Street in London.

The Damier Canvas, created in 1888, was Vuitton’s first pattern that bore a trademark and logo.

Georges, who took over the running of the business at the death of his father in 1892, took the company transatlantic, with the Chicago’s World Fair in 1893.

In 1896 Vuitton created the iconic Monogram Canvas (quatrefoils, flowers and LV monogram) that was more difficult to copy.

He indeed successfully reduced the number of imitations and counterfeit!

In 1913 the Louis Vuitton Store Champs-Elysees was open at No101.

It was the largest luxury baggage shop in the world at the time!

Generation after generation, Louis Vuitton’s family managed the company, which was turned into a holding company in 1977.

In 1987 Louis Vuitton SA merged with Moet-Hennessy in order to form LVMH, the first luxury group in the world, which was bought out by Bernard Arnaud in 1989.