The imposing cliff towers 90m above the Vézère River and follows its bed for over 1,5 km!

La Roque Saint Christophe is one of the 147 exceptional prehistoric sites, which owed the Vézère Valley to be listed as a World Heritage Site by UNESCO in 1979.

The rock shelter consists of five levels of cavities hollowed out by the river some 60 million years ago.

The frost dissolved the tender limestone during the Ice Age and enlarged the caves.

These 100 natural shelters were home to generations of men from the Paleolithic until the late 16th century.

Neanderthal men were the first to settle in the lower shelters some 55,000 years ago, when the river level reached the foot of the cliff.

Archaeological findings revealed that the cliff became a busy hanging village populated with hundreds of people!

Discovery of a double tomb

Excavations conducted in 1913 in the site also uncovered a Bronze Age (3000BP) a shallow grave that contained the skeleton of an adult and an adolescent placed head to foot on a bed of ashes.

It seems that it was a secondary grave because the bones were placed in anatomical order, long after death.

The grave and the artifacts it contained are now exhibited in the National Museum of Prehistory in Les Eyzies de Tayac Sireuil.

A replica of the burial was recreated on site. 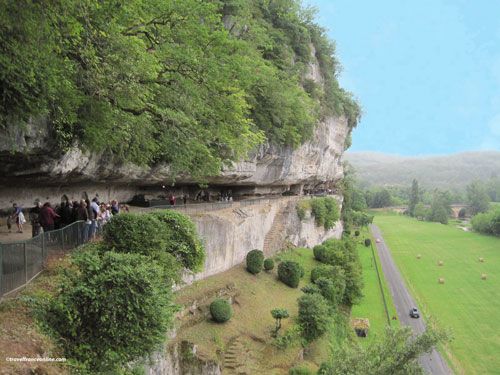 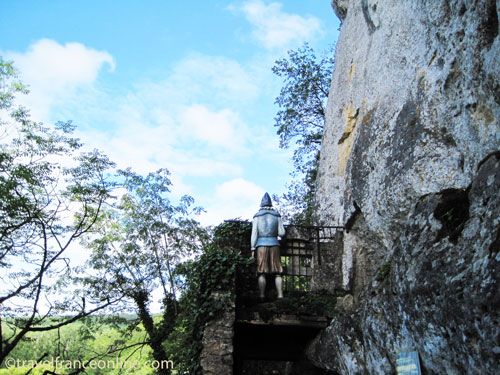 From a rock shelter to a troglodyte fortress

They settled down in the lush valley, where they grew cereals and bred animals.

The Barbarian invasions of the 3rd century pushed these farmers to take refuge in their ancestors' rock shelters.

However, they returned in the valley once the danger over.

La Roque Saint Christophe was inhabited during the 9th-10th century.

Frotaire, the Bishop of Périgord, indeed had the cliff galleries converted into a troglodyte fortress during the Norman incursions.

The cliff indeed commanded extensive views over the valley.

Watchmen could therefore quickly detect any intrusion and inform the population in time.

Rural populations would then move into the troglodyte fortress, taking with them livestock and harvested crops.

Safe and self-sufficient, they waited for the invaders to leave, then returned to their valley, rebuilt their farms and resumed life.

They retreated in La Roque Saint Christophe during the sporadic conflicts of the Hundred Years War.

However, the Protestants sadly seized and burned the old troglodyte fortress Wars of Religion of the 16th century.

All that left of the dwellings are the anchoring points of the beams in the cliff face and the traces of fire on the stones!

La Roque Saint Christophe troglodyte shelters have not been occupied since. 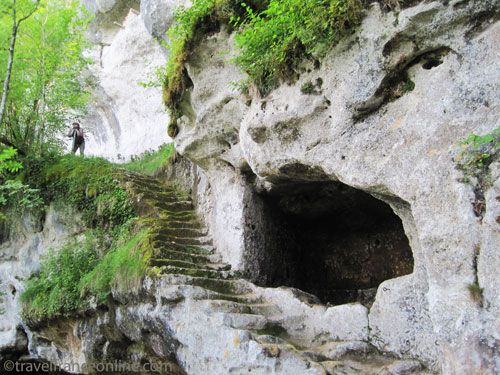 The great staircase that leads to the upper level 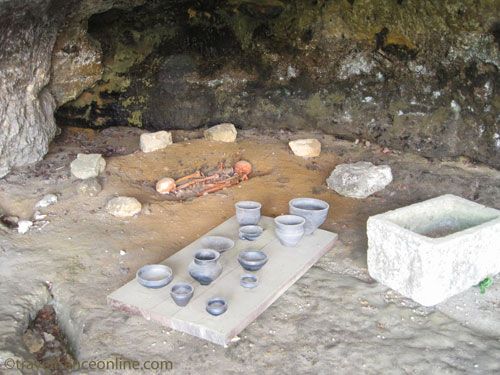 Replica of the Bronze Age double grave as it was found

The cow shed and slaughterhouse

A fortified gate was (and still is!) the only entrance to the site and was constantly guarded.

A narrow passageway then led to a reinforced door and a drawbridge that span a pit.

Once inside, travelers came across the fortress and the livestock's shelters.

They then walked by a lower shelter, occupied during the Paleolithic, and converted into a cowshed.

Fifteen of the rings used to tie the animals are still embedded in the rock.

A slaughterhouse was built above the cowshed.

Amazingly, the grove carved in the ground in order to allow the blood to flow down, the butcher’s block and the sink are still visible.

The meat had then to be prepared for long conservation, so a smokehouse was set up next to the slaughterhouse.

The room had a hole in the ceiling in order to evacuate the smoke; the rings where the meat where hung to be smoked are still visible.

Did the butcher took his valuables with him when he moved in the troglodyte during the 12th century?

His dwelling, adjacent tothe slaughterhouse, indeed still boasts a superb safe carved into the rock wall and securely closed with a wooden door and locked! 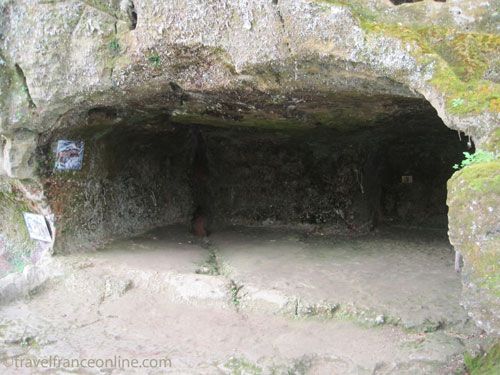 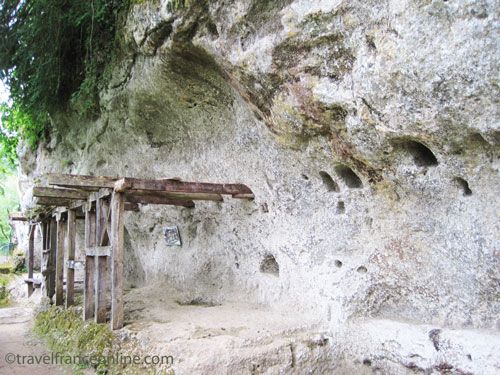 Frame of a troglodyte building, the beams were anchored straight into the rock

From there, a long and narrow covered passage leads to the 'village'.

This passage was cut into the rock during the Middle Ages, in order to replace the original path that ran along the cliff edge.

People could indeed see their own reflection in the water, as the river level then reached the base of the cliff.

The village started at the level of the vast terrace where the passage exits.

We know from the holes left by the beams that thirty dwellings and shops lined this terrace.

Beams were indeed anchored directly into the rock in order to support an outer wall and a single-side roof.

Staircases were cut into the cliff face in order to link the upper levels of the village.

It is believed that over 1000 people once lived in the cliff's 100 troglodyte dwellings!

They therefore found where the potter, weaver, smith, carpenter, shoemaker and silversmith once lived and worked!

The village had even a troglodyte church with a bell tower!

However, all that is left today are the crosses carved in the wall, the graves cut straight into the ground, the baptismal font and the ceiling rings where the oil lamps were hung.

Researchers created a superb model of the medieval troglodyte village, which they placed in the centre of the terrace.

Various documents kept in the Périgueux diocese brought additional knowledge about the village and allowed them to reproduce it faithfully. 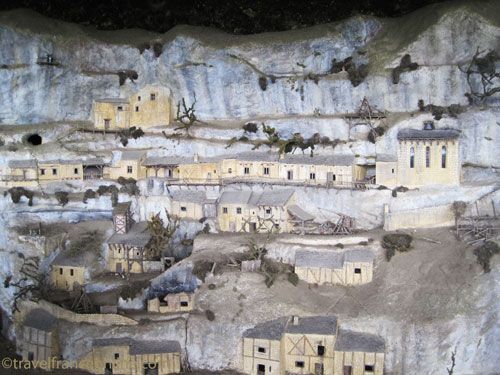 Model of La Roque Saint-Christophe during the Middle Ages 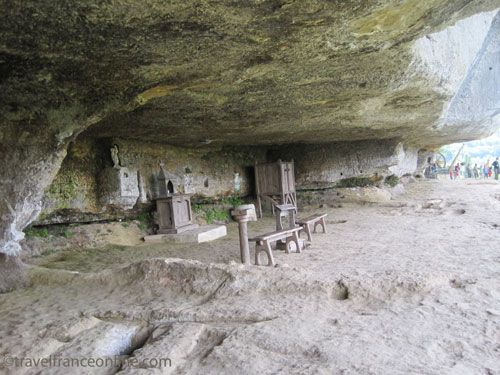 La Roque Saint Christophe was a fortress, and therefore had a lookout.

The watchman communicated by horn sound signals with his counterpart positioned on the opposite bank.

This was the most effective way of communication between the 22 troglodyte shelters located between La Roque Saint Christophe and the village of Campagne downstream.

Experiments conducted in the early 1960s indeed showed that it only took 6mn for a message sent by horn sound to travel the 18km that separate the two villages! 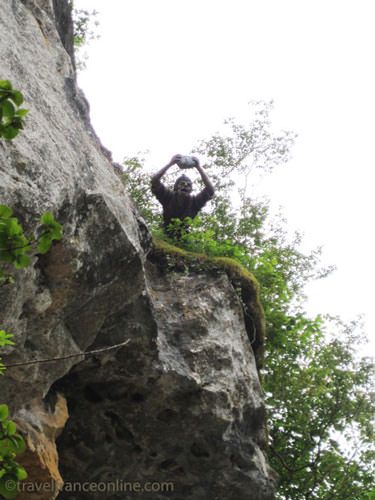 A little bit of humour...Neanderthal guarding the entrance to his home! 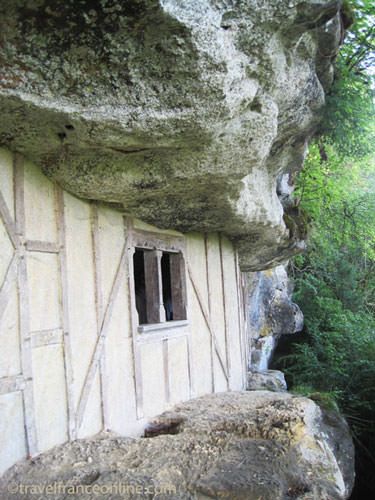 Weapons Room rebuilt to the identical

Lifting machines and others

La Roque Saint Christophe also had a building site where villagers maintained their tools and machines.

Various machines they used were scientifically recreated and are now on exhibition on the far end of the terrace.

The horizontal winch was mainly used to lift water and ore needed for the forge.

A fixed scaffolding, a quarry, a swing crane with beam that allowed a lateral 360 degrees revolution of loads, and a capstan used to move loads are part of the exhibits.

All supplies and goods, including water and livestock, were lifted up to the village using some of this equipment. 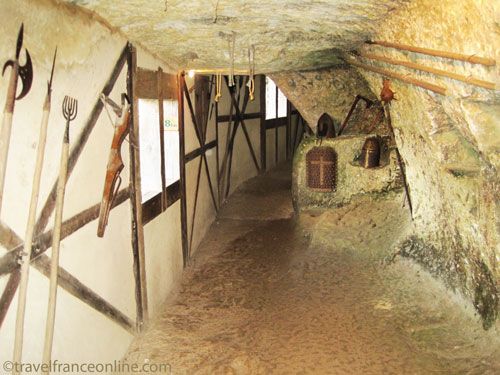 Interior of the weapons room 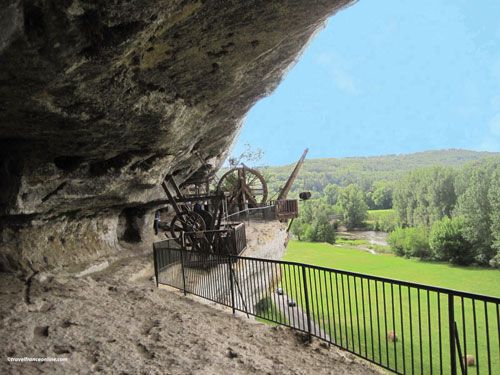 The great staircase (not open to the public) located by the site's entrance led to the upper level of the village.

It was indeed equipped with powerful projectile machines that could easily target any intruder sailing on the river.

The weapon room was recreated in order to display the amazing range of medieval weapons.

It would have then been full of bows, crossbows, pebbles and slings, swords, spikes, daggers, maces, axes, flails, halberds, helmets, coats of mail and shields, as well as agricultural tools… a whole war equipment!

The men in arms were positioned in a cavity next to the weapons.

The garrison's kitchen was recreated in the original room that still bears ancient traces of smoke.

It displays a wide range of medieval cooking utensils arranged around a central hearth.

The various artists’ impressions, the model and all these reconstructions help visitors imagine how La Roque Saint Christophe once looked like.

The site is unique and really worth the visit!