The industrialist Emile Guimet is at the origin of it foundation.

From his many travels around the world, Emile Guimet indeed brought back large collections of objects and works of art.

He initially exhibited them in a museum he founded in 1879 in Lyon (his hometown).

He built the Paris Guimet Museum in order to transfer his ever-growing collections.

It coincided with the closing of the 4th Exposition Universelle de Paris, the World's Fair for which the Eiffel Tower was built!

Guimet largely funded the construction of the neo-Greek building and its superb rotunda.

The architect Charles Terrier found inspiration from the plans Jules Chatron drew for the Lyon museum. 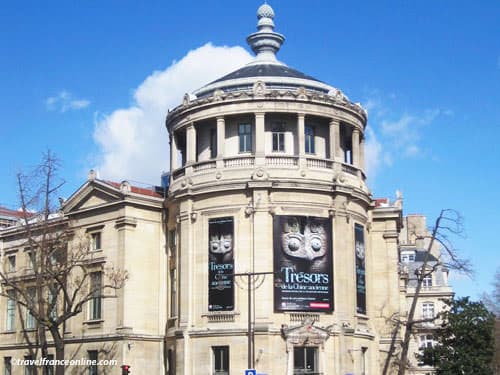 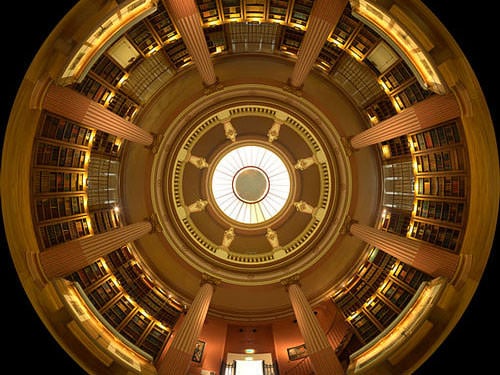 Rotunda in the library 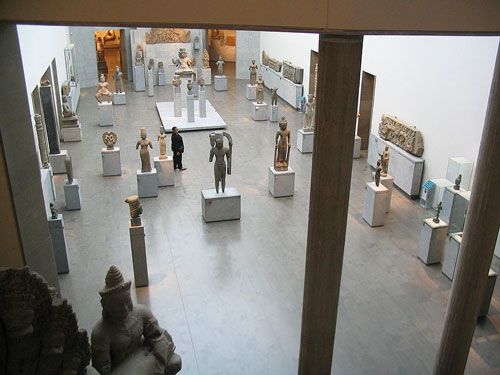 The Guimet Museum was initially founded as a museum of Egyptian religions, classical antiquity and Asian countries.

However, it very quickly specialized in Asian collections, initially from Korea and Tibet.

The art collections were enlarged with works of art from Central Asia and China from 1927 onward, when it became attached to the Direction des Musées de France - Department of French Museums.

By then, the Guimet Museum already exhibited the largest collections of Asian art outside Asia!

Soon after, the Musée du Trocadero transferred its Indochinese collections, brought back by the explorer Louis Delaporte, to the Guimet Museum.

The collections were also enlarged with works of art lent by the Délégation Archeologique Francaise en Afghanistan - French Archaeological Delegation in Afghanistan.

The Khmer collections were added from 1938 onward.

This exceptional Asian cultural heritage turned the Guimet Museum into the undisputed specialist in Asian art.

An exchange of collections took place with the Louvre from 1945 onward.

The Guimet Museum exchanged its Egyptian collections for the Louvre’s department of Asian art's collections.

It then became one of the largest museums of Asian art in the world!

The successive curators and generous sponsors kept enlarging and enriching the collections over the following decades.

A library with a splendid rotunda was founded and open to the public.

In 1991, the Guimet Museum acquired the building located at no. 19 Avenue d’Iéna in order to found the Pantheon Buddhique.

This section is essentially dedicated to the collections Emile Guimet brought back from Japan.

Major renovation work was undertaken in 1996 in order to turn the museum into a modern cultural centre offering temporary cultural events such as cinematographic retrospectives, recitals, concerts and dance performances.

The Guimet Museum's collections are today regarded as the most complete collections of Asian art in the world!

These are exhibited over 5500m2 of permanent galleries laid out in large open space where natural light plays an essential role.

The library and the roof of the Guimet Museum were classified Historical Monuments on July 11, 1979.