The Fontaines du Theatre Francais are located on Place André Malraux, next to the Comédie Française theatre.

This important Parisian crossroads marks the beginning of the Avenue de l'Opéra.

It therefore links the prestigious Rue Saint-Honoré to the Opéra Garnier.

It is also at the junction of Rue de Montpensier, Rue de Richelieu and Place Colette.

It is located in the heart of an area rich in tourist attractions.

This is indeed where you'll find the Louvre, Palais-Royal, Comédie Française, Rue Saint-Honoré and Opéra.

There's no flowerbeds nor lawn, but you'll find a couple of benches placed under the shade of the few trees.

The Place André Malraux was initially known as Place du Théâtre Français (the original name of the Comédie Française).

It was created in 1867, during Baron Haussmann's renovation of Paris.

It was renamed in 1977 to pay tribute to the author and Minister of Culture André Malraux. 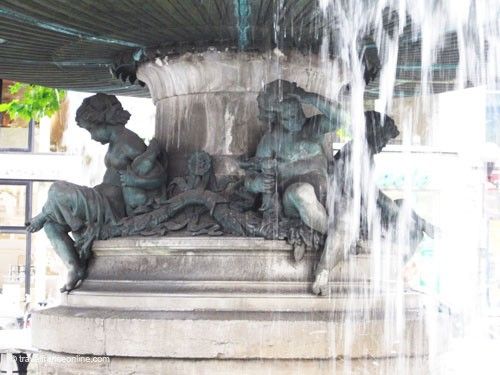 The square is often overlooked because of its location.

It's a pity, because it boasts two superb fountains.

These two fountains are very similar, however, not identical!

Each consists of two basins topped with bronze statues.

The fountain closest to the Comédie Française and Rue de Richelieu is topped with a River Nymph (Nymphe Fluviale) sculpted by Mathurin Moreau.

The lower basin is adorned with cherubs.

The second fountain stands by the Rue Saint-Honoré.

It is topped with a Sea Nymph (Nymphe Marine) sculpted by Albert-Ernest Carrier-Belleuse.

The lower basin is also adorned with a Ronde d’Enfants sculpted by Louis Eudes.

As written above, it's a pity that the square should be overlooked!

It is indeed a great place for a short break, while visiting the many neighbouring tourist sites or while shopping in the prestigious Rue Saint-Honoré.