The Christmas Tree or Arbre de Noël tradition originated in Northern countries mythology, where it was found under various forms.

The tradition was revived in Germany during the 16th century.

It all started with the Sacred Tree.

Legend has it that the Fire of the Gods was stolen and given to mankind by a Snake-Lightning which lit up the Tree of Knowledge that granted consciousness to men.

However, this annihilated their deep communion with Nature.

In order to redeem themselves, men hung offerings to the branches of a tree.

These offerings included wheat rolls, apples, flowers and various food in the branches of a tree.

They then set it on fire, symbolically returning the Fire to their Gods.

Celts associated a tree to each lunar month.

The spruce corresponded to 24th December.

It symbolized childbirth, because they considered December 24 as the day of the rebirth of the sun.

This tradition was adapted for the Christian faith in the 8th century.

St. Boniface indeed converted the Germanic populations (among which the Franks who colonized Gaul in the late 5th and created the Kingdom of France).

The missionary used the fir tree's triangular shape in order to introduce the concept of the Trinity.

Most pagan folks, however, remained faithful to their ancient traditions and for generations used various trees for the festival. 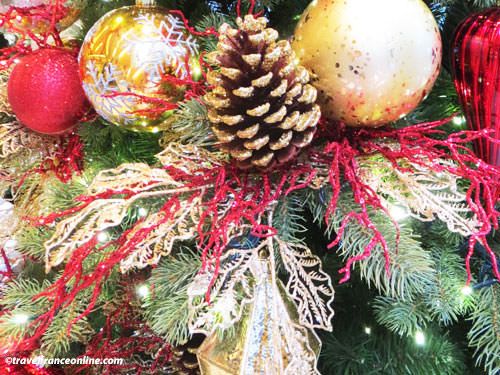 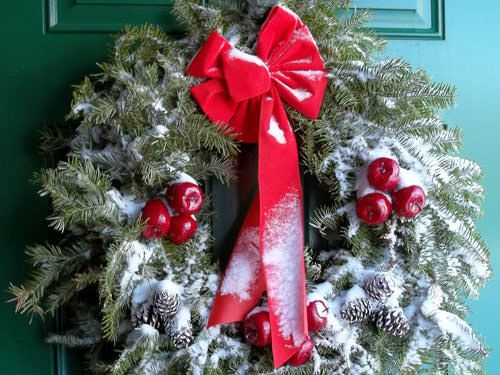 Wreath with a bow

Christmas Tree Decorations can be what you want to make of them, understated or lavish, however, each item carries religious symbolism!

The Evergreen tree is of course a symbol of everlasting life and light; blue and white represent snow and winter and red the blood of Jesus the Saviour.

The Star represents the Star of Bethlehem which guided the Three Wise Men to the stable where Jesus was born.

The Bell brings back the lost sheep into the fold.

The Candle represents Jesus as a Divine Light that every Christian should follow, the same light that led the Three Wise Men.

The Candy Cane is the Good Shepherd's crook used to bring back the lost sheep.

Finally, the Wreath is the symbol of God's Eternal Love.

Most people take their Christmas decorations down - including the decorative Christmas plants - on the 12th day after Christmas or January 5! 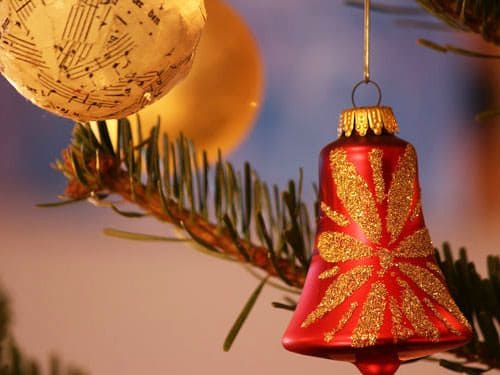 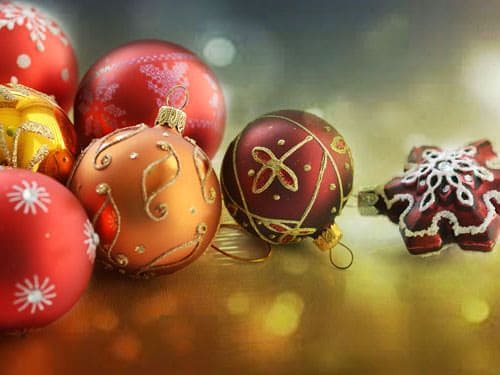 However, they stopped using apples after the harsh winter of 1858 when all the apple-trees died.

A glassblower craftsman from Meisenthal in the Moselle (Eastern France), however, had the brilliant idea of inventing colorful glass balls in order to replace them.

The Christmas ball was born!

Germany and Eastern European countries have since traditionally been the specialists of blown, spun and molded glass, metal, wax or wood decorations.

Decorations include angels, Baby Jesus, miniature Santa, gifts, bows and wooden objects of all sorts amid garlands and multicoloured balls. 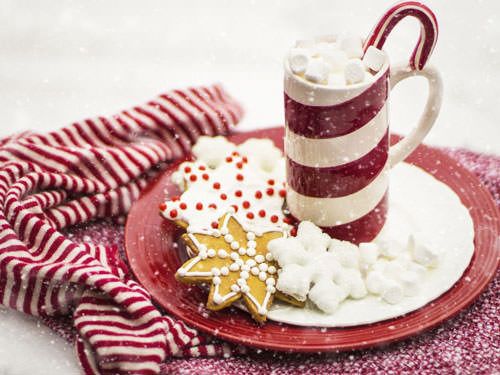 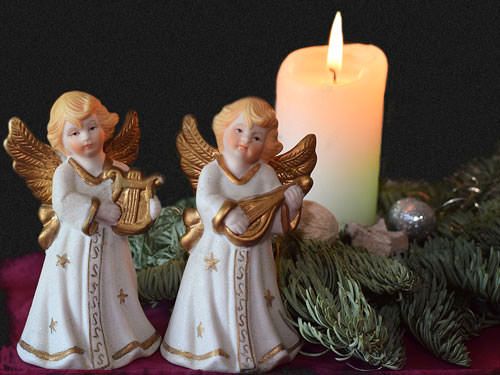 In the Mystery of Paradise, there was a tree covered with red apples.

Apples indeed have a deep religious symbolism and in the old calendar of saints, Adam and Eve were celebrated on December 24.

That said, the Christmas Tree tradition was not really popular among common folks, and more of a trend for the aristocracy.

Worse, the Church of Rome considered it a pagan tradition because it was a reminder of the pagan Winter Solstice celebrations.

However, immigrants from Alsace and Lorraine introduced the German Lutheran Christmas Tree tradition in France after the Franco-Prussian War of 1870.

The tradition spread like wild fire, as the Church had lost all power since the French Revolution of 1789.

The Church was therefore very quick to adopt the use of evergreen fir trees; they were indeed ideal to symbolize life that never die, the Paradise of Adam and Eve, the knowledge of good and evil!

By the turn of the 20th century, each French household had its Christmas tree!