Chateau de Pirou, one of the oldest Norman castles

The Chateau de Pirou is one of the oldest castles in Normandy and a superb example of medieval military architecture.

You can discover it with a guided tour or at your own pace; if you visit in spring, I recommend the heritage weekend, when the castle is turned into a Viking and medieval Norman village.

That said, this spectacular fortress will charm you all year long; children love it as they can climb the walkway, walk in the footsteps of guards and imaginary knights in full armor.

The lords of Pirou built the stone fortress in the mid-12th century to replace the first wooden fort erected on a Viking site.

It protected the local ponds which provided a natural anchorage for flat-bottomed boats and their cargo.

These barges could indeed sail from the sea into the mouth of the river Ay and the harbour of Lessay, farther north; they then followed the channels open through the surrounding marshes to reach Pirou.

The fortress stands on a man-made oval-shaped island, once defended by 3 deep moats and 5 fortified gates, each protected by a moat and a drawbridge.

Three of these gates today remain; the barbican (1st), the Châtelet (2nd) and the 4th gate.

This gate boasts a pedestrian and a carriage entrance and a walkway; it also bears the coat-of-arms of Richard the Lionheart, Duke of Normandy.

As you can guess, the Chateau de Pirou was impregnable! 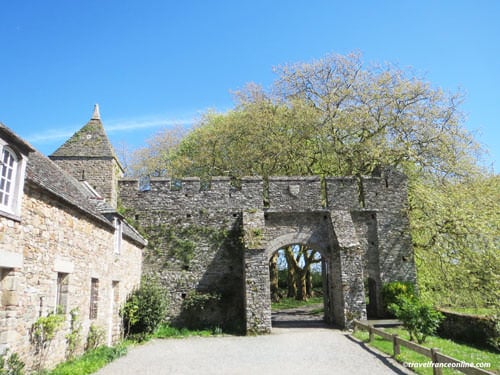 4th fortified gate with its pedestrian and carriage gates 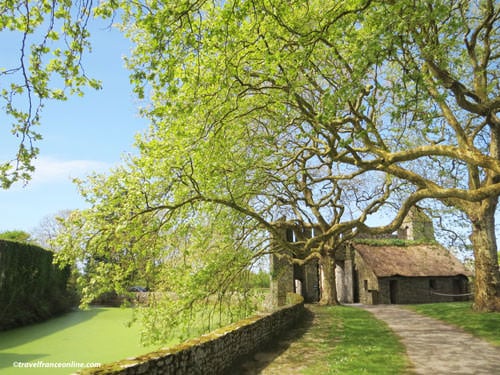 4th fortified gate with its pedestrian and carriage gates

Deep moats isolate the fortress from the fortified low court and its annex buildings.

These include the 18th century bakery, the wine press, Saint-Laurent Chapel, the lords of Pirou’s private chapel, the Salle des Plès where they did justice and finally the stables.

A stone bridge was built in the 17th century to replace the old drawbridge that led to the fortress’ gatehouse.

This 13th century building leads straight into the inner courtyard and the two stately homes.

The kitchens, guards room and stately dining room of the early 17th century Vieux Logis are open to the public, but not the 18th century mansion known as Nouveau Logis.

The impressive ramparts date from the 12th, 13th and 15th centuries; the walkway and guard rooms are open to the public.

Sadly, all that is left of the dungeon is the lower section. 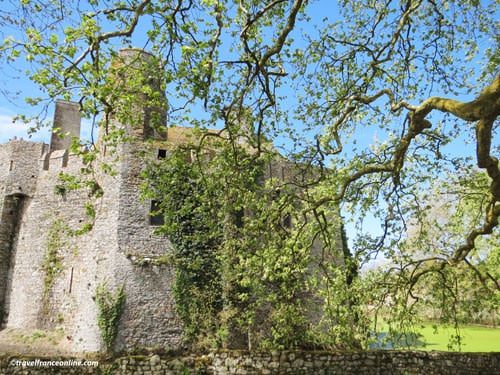 Fortress seen from the bakery 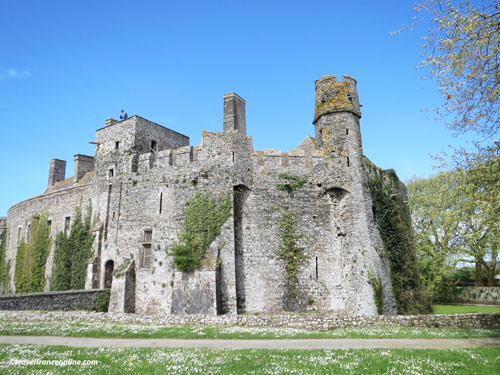 The chapelle Saint-Laurent is understated, yet beautiful, as it boasts a hulled boat ceiling and a Romanesque stone font.

The stained-glass windows bear the coats of arms of the successive lords of Pirou - Pirou, Bois and Vassy - as well as those of Richard the Lionheart, Duke of Normandy, and those of Abbot Lelégard (who restored the castle).

A superb epitaph engraved on black marble and dedicated to Charles Bois adorns the rear wall. 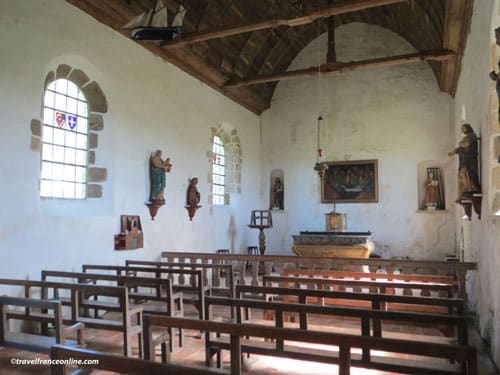 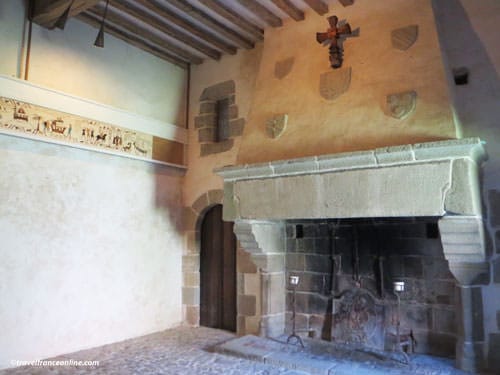 The Salle des Plès (Plaids) is where the lords of Pirou did justice.

This impressive hall, which has retained its monumental fireplace, today serves as exhibition hall for the Tapisserie de Pirou.

The 58m long tapestry resembles the Tapestry of Queen Mathilde or Bayeux Tapestry.

It relates the story of the Vikings, from the conquest of Normandy to that of Sicily around the year 1000.

The embroider Therese Ozenne created it over 16 years and used fabrics, wool and stitches identical to those of the Bayeux tapestry.

The result is impressive! 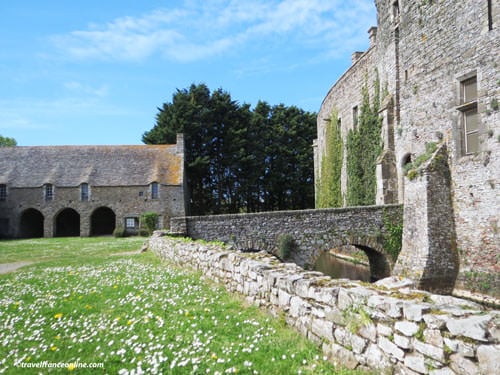 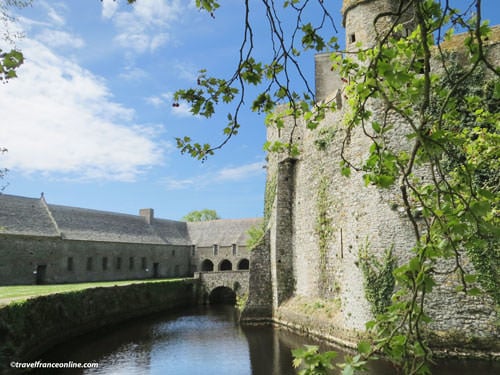 The Lords of Pirou

William the Conqueror rewarded one of the first lords of Pirou who joined him in his Conquest of England by bequeathing him some land in the county of Somerset - the current village of Stoke-Pero.

Pirou's direct descendants kept the castle until the 15th century; the Bois family inherited it by marriage.

Another branch of the family, the Vassy, owned it from the 17th century until the French Revolution.

Huguet de Semonville bought it then and transformed it into a farm; he left the buildings fall into ruins until 1833, when he sold it to the Quesnel-Morinière, a well-off family from the nearby city of Coutances. 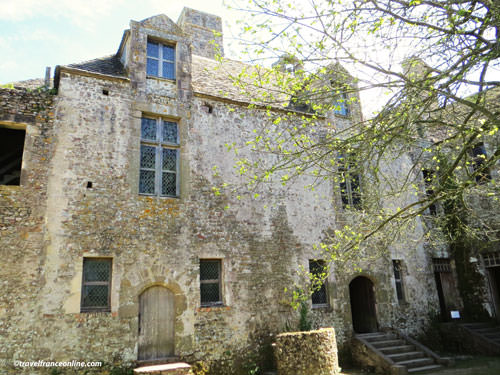 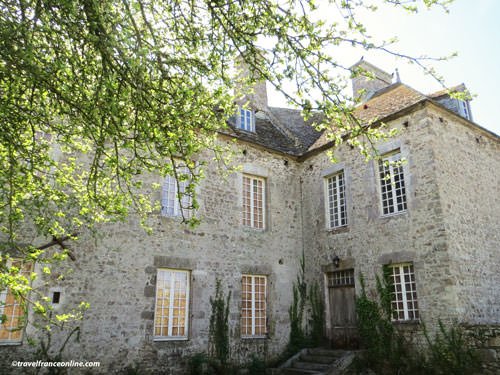 Abbot Lelégard acquired the castle in 1966 and spent the following two decades restoring it with the help of young volunteers and artisans.

In 1991, he bequeathed it to the Foundation Abbey de la Licerne*, which has maintained it since.

Pirou was classified Historical Monument in 1968. 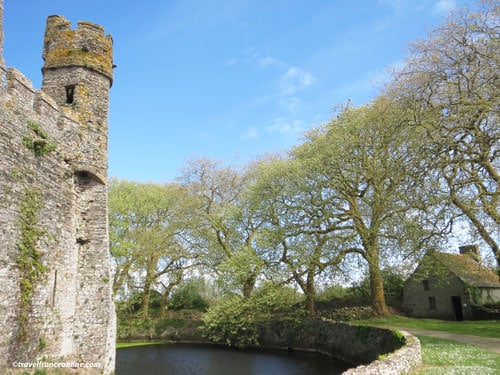 Chateau de Pirou and bakery in the low court

Fortress seen from the bakery

The legend of the Geese of Pirou

As any medieval building, the Chateau de Pirou boasts a beautiful legend.

This legend, one of the oldest in the Cotentin, appeared during the Norman invasions; it explains in a poetic way why Graylag geese migrate to the region every year.

Judging the fortress impregnable, the Normans decided to besiege it to starve its occupants.

But the lord of Pirou asked the village’s magician to help him and his family escape without attracting their attention.

The old man therefore produced a book of magic spells and turned them into geese.

Once the danger over, the Pirou were supposed to return to read the magic formula backwards to recover their human form.

The Normans saw a group of Graylag geese fly above the ramparts at dawn, but didn’t suspect anything.

When they eventually entered the fortress, it was empty, with the exception of the old magician who confessed to changing the lords into geese.

In retaliation, the attackers burned the castle and the book of spells.

The geese returned the following year, but no more magic formula!

They return each year in spring with the hope of finding it, but always leave empty-handed in the autumn...

So popular was this beautiful, yet sad legend, that Robert de Pirou added a goose neck to his family’s coat of arms during the 14th century. 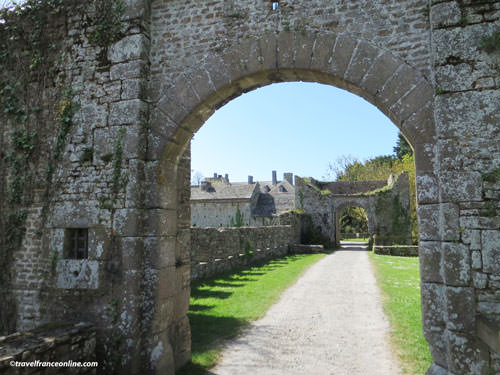 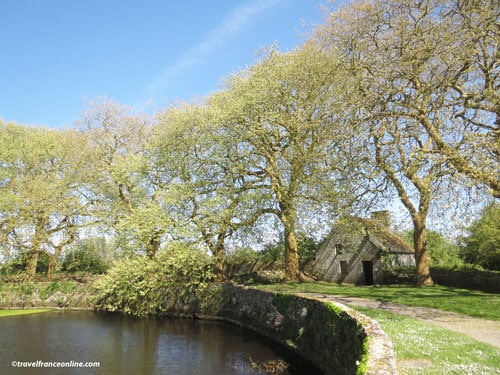 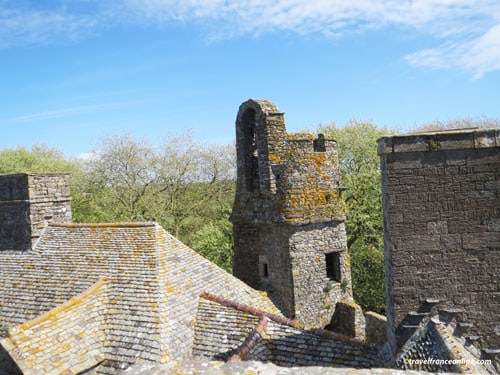 Roofs seen from the walkway