Cerny-en-Laonnois is located on the Chemin des Dames ridge, at the crossroads of the D18CD and D967 roads.

From there you can see the cathedrals of Soissons, Laon and Reims on a clear day.

The tiny village enjoys a notoriety that goes back far in time.

It was indeed the place of birth of Saint-Rémi, the bishop of Reims!

Closer to us in time, Napoleon spent the night in the village before engaging into the Battle of Craonne of 1814.

The most recent historical event, and without any doubt the most tragic, occurred during WWI!

Cerny-en-Laonnois was indeed in the centre of the various offensives launched on the Chemin des Dames.

On the eve of the Great War, the village had nearly 200 inhabitants; most worked the farmland located on the surrounding plateau.

The local soil has always been conducive to the cultivation of sugar beets.

Aisne is still the first producing of sugar beets department in France!

Once harvested they were sent to the sugar refinery in Cerny-en-Laonnois.

But this agricultural landscape changed on August 31, 1914, when the German troops drove back the French positioned on the plateau.

Between September 5 and 13, the French and British troops managed to re-gain ground in the Aisne Valley, between Venizel and Berry-au-Bac, forcing the Germans to retreat on the ridge.

One of the Germans' resistance points was the sugar refinery of Cerny-en-Laonnois, which they fortified.

The Allies launched the assault on the refinery between September 13 and 15.

However, they failed in destroying the German defences on the ridge.

Their initial progress was halted.

The English dug a network of trenches between the Cerny-en-Laonnois and Craonne.

The fighting, known as First Battle of the Aisne, tragically ended in a considerable number of casualties.

By early 1915, the Germans had consolidated their positions on the Chemin des Dames.

They had indeed fortified the plateau, the ridge and the impressive network of underground quarries.

They retained these positions until 1918. 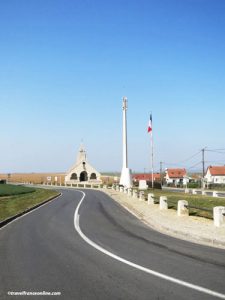 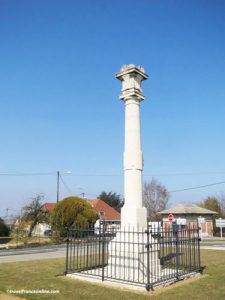 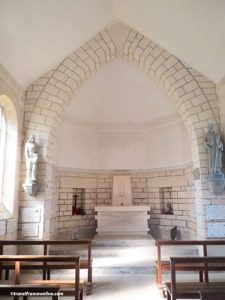 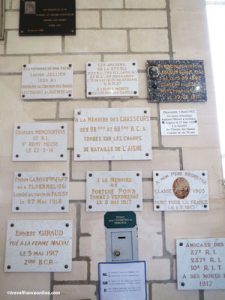 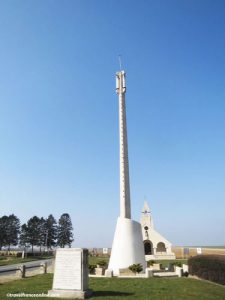 Lantern of the Dead and Commemorative slab

The village of Cerny-en-Laonnois was completely destroyed, as were the 18 other villages along the ridge.

The area was declared as 'Red Zone'.

The 'old' village was abandoned and a 'new' rebuilt in 1924 a few hundred meters from its original location.

The population of Cerny-en-Laonnois is now half what it was at the beginning of WWI.

The café-brasserie, Le Poilu, is the only trade for 17kms!

Cerny-en-Laonnois has become, however, a major Place of Remembrance on the Chemin des Dames.

The Chemin des Dames Memorial of Cerny-en-Laonnois is a chapel built in the early 1950s by the National Union of Veterans.

This association consists of former officers, dignitaries of the Catholic Church, the president of the Protestant Federation of France and the Chief Rabbi of France.

The Memorial is a Place of Remembrance; it was inaugurated on April 22, 1951.

A religious and military ceremony is held every April-May in order to commemorate the deadly fighting of 1917.

The small neo-Romanesque chapel is built with the local cream coloured limestone; its facade is topped by a statue of the Virgin and Child.

The interior contains numerous commemorative plaques honouring the memory of the soldiers who fell on the Chemin des Dames.

The memorial was fully restored for the celebration of the Centenary of the Great War.

The first Lanterns of the Dead appeared around the 13th century.

The towers were topped with an attic room open with three apertures.

At dusk, a light or a fire was lit in the room.

Seen from very far, it guided the deceased.

The Lantern of the Dead in Cerny-en-Laonnois was erected in the early 1960s on the small patch of grass located outside the chapel-memorial.

Its light shines at night and guides the soldiers who fell on the battlefields of the Chemin des Dames.

It is visible from the cathedrals of Laon, Reims and Soissons.

It perpetuates the Memory of the Fallen.

A stele dedicated to the 38th Infantry Division was placed in front of the Lantern of the Dead.

It pays tribute to the soldiers who fought in this division in September 1914 during the assault of the sugar refinery of Cerny-en-Laonnois, and in April and October 1917.

It is inscribed with the following dedication:

This column honours the soldiers of the 1st Battalion Loyal North Lancashire Regiment, who fell during the various offensives launched on the ridge.

It is inscribed with the following dedication:

"In memory of the officers warrant and non commissioned officers and men of the Battalion Loyal North Lancashire Regiment who laid down their lives on active service 1914-1919 ".

Cerny-en-Laonnois is a tiny village but a major Place of Remembrance.