The dough is cut in strips, then deep fried and sprinkled with sugar.

The word Bugnes is a Provencal adaptation of the French word beignet meaning fritter.

The Bugnes originated from Ancient Rome, and were prepared during the carnival.

The Romans exported this culinary tradition in Savoie and the Rhône Valley when they conquered the south of France.

The bugnes (or Bunyi, the original Latin word for it) have become a specialty of Central France.

They were traditionally prepared on Mardi Gras, when all leftovers of fat were to be used before Lent, the 40-day period of penance and fasting that lasted until Easter.

There are various recipes, but this is a basic and easy one.

Mix the flour, pinch of salt, yeast, sugar and vanilla sugar in a large bowl
Add the egg, melted butter, lemon zest, rum and 1/2 cup of milk
Knead the dough until you obtain a ball
The dough should be elastic
Add a little flour if the dough is too soft, or little milk if it is too hard
Let the dough rest for 30mn
Roll it out to a thickness of 5 mm
Cut it into strips of 10 cm by 4 cm
Make a 5cm incision in the center of each strip
Deep fry the strips, and turn them over once
Drain them on kitchen roll to absorb the excess fat
Sprinkle with icing sugar and serve hot

Credits: Source article Jean Piludu - Article translated in English and edited by and for travelfranceonline.com 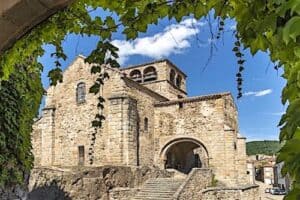