It is situated along the village's main street and a couple of 100m away from the Cro Magnon Shelter.

In 1880, Marcel Pataud discovered a series of flints while working his land.

The excavations that followed uncovered a wealth of objects, tools and a superb low-relief depicting an ibex!

Study of the 9m high sediments strata indeed clearly shows the 40 successive periods of human occupancy that took place between 33,000BP and 17,000BP.

They include countless remains of tools and weapons made of flint, bone and antler, food scraps as well as hearth traces and burials.

These findings allowed the archaeologists to understand the evolution of these distant ancestors' lifestyles and reindeer hunters over a period of 15,000 years!

However, most of the shelter collapsed over the centuries.

The Ibex of the Abri Pataud

The shelter was converted into a small on-site museum in order exhibit the sculpture and some of the findings.

The museum also displays the field techniques used, as well as the results of the work  the archaeologists have conducted since the start of the (ongoing) excavations.

The farm building was transformed into a small study centre for the researchers.

Abri Pataud is regarded as one of the major excavation sites of modern archaeology.

It is very small but worth the visit! 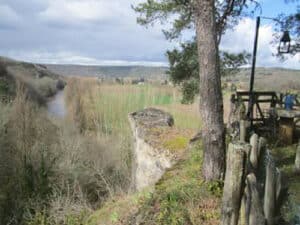